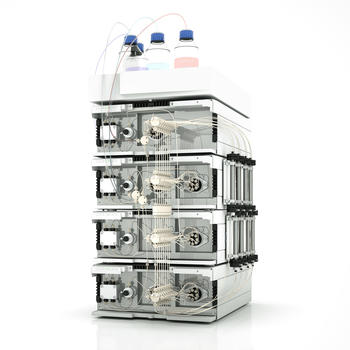 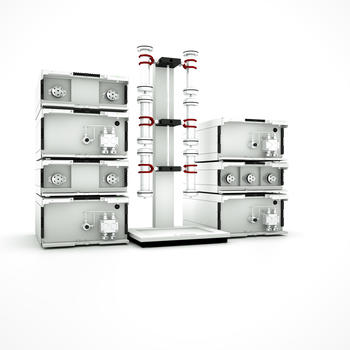 Simulated moving bed chromatography (SMB) is a process chromatography technique that allows you to continuously separate the molecules from binary mixtures into two fractions.

Chiral compounds, carbohydrates and cell culture products can be separated much more effectively than with batch HPLC due to SMB’s better utilization of the columns.

The AZURA® SMB systems from KNAUER operate continuously and are highly productive. There are two types of devices to choose from for separating your binary mixture:

Thanks to their compact design and small footprint, the AZURA SMB systems use the valuable space on your lab bench efficiently.

The AZURA SMB standard system consists of four pumps and seven multi-position valves. With regards to material and configuration, AZURA SMB systems are the most flexible such systems on the market, and they also allow exceptionally high pressure values.

The SMB technology makes maximum use of the stationary phase of the columns. This reduces the costs for the solid phase by up to 80 percent. What you get is a virtually undiluted product while minimizing the solvents for concentration by up to 90 percent.

The AZURA SMB systems possess an 8-column setup with a flexible column arrangement. Due to this configuration, the SMB system can be flexibly adapted to many different separation modes and achieve high productivity, even when your separation challenge is difficult.

For chromatography processes to succeed, stable temperatures and constant flow conditions are crucial. Complete real-time monitoring of both the flow rate and the temperature throughout the SMB process ensures consistently high purities and yields.

Choice of materials to suit application

The AZURA SMB systems are available in two configurations for the flow paths:

The AZURA SMB systems can be used in highly regulated environments such as the pharmaceutical industry because the PurityChrom® MCC software onboard is 21 CFR part 11 compliant.

More about KNAUER
Top products
other
Topics A-Z
All topics
Get in Touch with the Supplier Now: Request information or a quote Download brochure