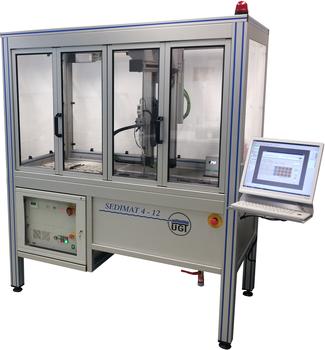 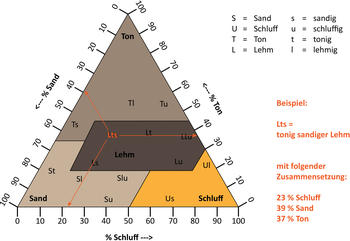 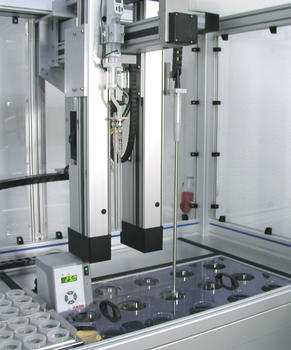 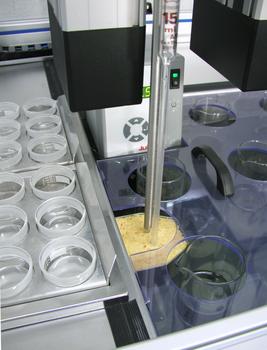 The Sedimat 4-12 operates on the basis of the KÖHN analysis in accordance with DIN ISO 11277, which until now has been the only rational measurement method to provide identical results for sedimentation analysis with the same dependence on particle shape. The sedimentation rate of soil particles was investigated on a previously homogenised soil sample in which carbonates and organic substance had been removed.

The fine soil is composed of fractions of coarse silt (gU), medium silt (mU), fine silt (fU) and clay (T). This is illustrated by the soil texture triangle. The individual fractions have different sedimentation rates due to the different particle sizes (< 2.0 µm - < 63 µm) and shapes. As a result of the different sedimentation properties, a controlled sedimentation of the homogenised soil suspension can be used for separation and therefore to quantify the individual fractions. During the sedimentation process, defined volumes are removed from the suspension at defined times and at a defined height, and their solid content subsequently determined.  Due to the high requirements in terms of accuracy, manual testing harbours several sources of error and is extremely laborious because of the slow sedimentation rate of fine soil particles.

The automation of this measurement procedure enables the work involved to be significantly reduced and accuracy increased. Subjective measurement errors are excluded. Temperature fluctuations, vibrations and turbulence, which have a big influence on measurement accuracy, are also minimised. Since the work is limited to the preparation of samples and their analysis, it is possible to conduct a complete KÖHN analysis on 12 samples for all 4 fractions each working day using the Sedimat 4-12. Precise compliance with test parameters during homogenisation, temperature control and pipetting produces a statistically reliable result.  Using the Sedimat, the measure of variation during repetition with the same samples is < 1 %.

Maintaining Temperature:
The samples stand in a water bath kept at 25°C throughout the entire test procedure in order to guarantee a constant temperature. To equalise the temperature, the samples must remain in the water bath for at least 30 minutes before the test can begin. Accurate temperature compliance is important and also stipulated in Köhn because it has a very great influence on the sedimentation rate of the particles.

Homogenisation:
The soil samples are agitated using a propeller stirrer with variable speed and submersion depth. Specially developed stirring routines ensure complete homogenisation. The stirrer is cleaned in a rinsing bath and dried at very high speeds before each sample change to prevent distorted results through carryover between samples.

Pipetting:
The suspension is removed using a piston-operated pipette with suction holes at the side. The prescribed submersion depth is checked by an optical surface sensor, so that this is always exactly the same irrespective of the fill level of the sample vessel. For fraction 1 (gU) the sample is removed at a depth of 20 cm below the surface of the water, and for fractions 2-4 (mU, fU, T) at a depth of 10 cm. The removal of the suspension starts 3 seconds after reaching the prescribed submersion depth. The pipetted volume of suspension of 10 ml is defined by the piston operation.

After withdrawal, the pipette and sensor are transported to a cleaning station where any adhered drops of suspension are removed with a sponge.

More about Umwelt-Geräte-Technik
Top products
other
Topics A-Z
All topics
Get in Touch with the Supplier Now: Request a quote or information Download brochure