Introduction
In all oxygen consuming cells, metabolism and oxidative stress generate several intermediates and byproducts that are collectively known as reactive oxygen species (ROS). ROS are necessary intermediates in the human body, but they are also involved in the aging process and in the development of many degenerative diseases, including cancer, heart disease, Alzheimer’s and Parkinson’s. ROS are dangerous to cellular structures and functional molecules (i.e. DNA, proteins, lipids) as they act as strong oxidizing agents or free radicals. Biological antioxidants are able to dispose of ROS; however, they are not completely effective in eliminating all of the free radicals, oxygen ions and peroxides that can do damage to the body. Furthermore, ROS can be generated from exposure to other external sources such as cigarette smoke, pollutants, chemicals and environmental toxins. 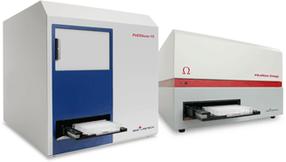 One standardized method for determining the antioxidant capacity of a substance is the ORAC (oxygen radical absorbance capacity) assay. (1) The ORAC assay is based upon the inhibition of the peroxyl-radical-induced oxidation initiated by thermal decomposition of azo-compounds such as [2,2’-azobis(2-methylpropionamidine) dihydrochloride (AAPH)]. (2)

Herein we describe the application of the ORAC assay on a POLARstar Omega and PHERAstar FS (Fig. 1) using Trolox® (a water-soluble analogue of vitamin E) as a standard substance. Different fruit juices were measured for their ORAC value.

Assay Principle
Over time ROS, generated from the thermal decomposition of AAPH, will quench the signal from the fluorescent probe fluorescein. The subsequent addition of an antioxidant produces a more stable fluo-rescence signal, with signal stability depending on the antioxidant’s capacity. Data points are summarized over the time by the MARS data analysis software. This is then compared to the standard, Trolox®,and is expressed as micromoles of Trolox® equivalents (TE per gram or per milliliter of sample (µmole of TE/g or µmole of TE/mL). Please refer to Application Note 148 to see the assay principle graphically. (3)

Test Protocol
Different dilutions of Trolox® (12.5 µM to 200 µM) and fruit juices were prepared in phosphate buffer (10 mM, pH 7.4). All solutions should be prepared fresh daily.

In every working well of a 96-well plate the following was pipetted in triplicate. For a 384-well plate half of the volumes were used:

After incubation, fluorescence measurements (ex. 485 nm, em. 520 nm) were taken every 90 sec to determine the background signal. After 3 cycles, 25 µL of 240 mM AAPH was injected using the onboard injectors. Alternatively, AAPH can also be added manually with a multi-channel-pipette. This has to be done as quickly as possible since the ROS-generator displays immediate activity after addition. The test was resumed and fluorescence intensity measurements were taken up to 120 minutes. An instrument setting overview is given in application note 148. (3) 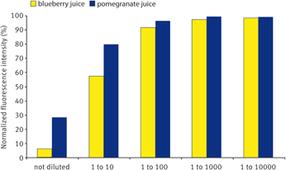 Results and Discussion
Fruit juices have ingredients that can quench the fluorescence signal. This usually depends on the dilution used (Fig. 2).

Figure 2 shows that not diluted blueberry juice quenches the fluorescence signal below 10 % of the expected value whereas diluting leads to nearly no quenching. The degree of quenching varies between the different fruit juices and can cause problems in ORAC evaluation when the data is not normalized. 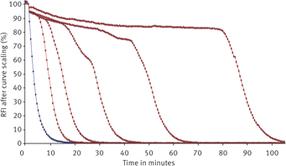 Fig. 3: Signal curves for different Trolox® concentrations (red graphs) and a blank without Trolox (blue graph) recorded on the PHERAstar FS in 384-well format. The curves were normalized to 100 %. The 100 % value is the maximum value that is obtained directly after injection of AAPH.

Signal curves taken from the MARS data analysis software in figure 3 show the fluorescence decrease of fluorescein after addition of the ROS generator AAPH over time. The area under the signal curve is depending on the concentration of the antioxidant standard substance (Fig. 3).

The area under the curve of samples is needed to calculate the Trolox® equivalents. In case of quenching ingredients, that are still active even in high dilutions, all signal curves should be normalized. This can be easily done with the MARS data analysis software using the “Curve Scaling“ feature. Applying Curve Scaling will allow for optimal area under the curve calculation. 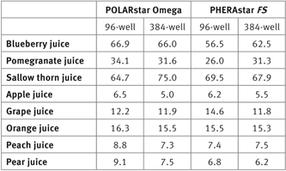 The Trolox® standard curve allows for back calculation of samples. In Table 1 a summary of all tested fruit juices is given.

From the tested fruit juices the sallow thorn and blueberry ones show the highest ORAC values. Please notice that the values may differ when compared to similar measurements as juice ingredients are different from manufacturer to manufacturer.

Conclusion
It was shown that the ORAC assay can be easily performed on the POLARstar Omega and the PHERAstar FS using the onboard injectors. The results obtained in both plate formats, 96-well and 384-well, are similar. Further downscaling of the total volume may be possible in combination with the PHERAstar FS.