Ever since scientists work with proteins, polymers and particles, there has been an enormous demand to know their molar mass and physical size without making a priori assumptions about these molecules. This is because their properties can depend both on their size and chemical composition. The range of samples studied has increased consistently since the very first analyses of elastomers and natural or synthetic polymers, due to the realization that many biological functions are also controlled by molar mass, size and shape.

The first absolute (i.e. made without reference to standards) measurements were based on fundamental physical characteristics and their relation to the molar mass. The most useful of these were:

Another absolute instrumental approach was also possible with the development of light scattering by Einstein1, Raman2, Debye3, Zimm4-5 and others6-7. The problem with measurements made using membrane osmometry and sedimentation was that they only characterised the bulk properties of the polymer sample without any further differentiation. Moreover, the measurements were excessively time consuming and prone to operator error. In order to gain information about a polydisperse mixture of molar masses, a method for separating the different sizes had to be developed. This was achieved by the advent of HPSEC (High Performance Size Exclusion Chromatography); also known as SEC or GPC (Gel Permeation Chromatography). SEC is based on the fact that the pores in the packing material of chromatography columns could be made small enough for molecules to become temporarily lodged in their interstitial spaces. As the sample makes its way through a column the smaller molecules spend more time travelling in these void spaces than the larger ones, which have fewer places to “wander”. The result is that a sample is separated according to its hydrodynamic volume Vh (i.e. the volume of a polymer or protein coil when it is in solution. This can vary for a molecule depending on how well it interacts with the solvent and the polymer's molecular weight). As a consequence, the big ones come out first, and then the small ones elute.

By choosing a suitable column packing material one can define the resolution of the system. Columns can also be combined in series to increase resolution or the range of sizes studied. Having produced a method of separation, the next step was to convert the time at which the samples eluted (elution time or retention time) into a measurement of molar mass. If the molar mass of a standard was known, then the time at which this standard eluted should be equal to a specific molar mass. Using multiple standards, a calibration curve of time versus molar mass could be constructed. For polymers, this was an important advancement in the analysis because a single polymer could be shown to be comprised of many different components, the complexity and distribution of which would also affect the physical properties. However, the shortcomings of this technique should be obvious: unknown samples were always measured in relation to known standards, and these standards may or may not have had any similarities to the sample of interest. The measurements made by SEC were then mathematically converted into data similar to that found by the existing techniques.

The inherent problem is that the system is calibrated according to the Vh characteristics of standards that are not directly related to the molar mass. If the relationship between the molar mass and Vh of the standard is not exactly the same as that of the unknown sample, then the calibration is invalid. Thus, to be accurate, the calibration must use the same type of molecule, of the same conformation, in the same eluent and have the same interaction with the solvent (hydration layer changes Vh).

Moreover, there must be no interaction of the analyte with the column other than that produced by size; e.g. chemical or electrostatic interactions between the molecules and the column packing material. Of course, one can see immediately that the vast majority of work performed using HPSEC is based on the habit of standard calibration and the hope that they will somehow mimic the actual molecules of interest. As the demands on polymer properties have increased, the necessity of getting absolute information on the molar mass and size has also increased. This is especially important in pharmaceutical applications where slight changes in molar mass (e.g. aggregation) or shape may result in different biological activity. These changes can actually have a harmful effect instead of a beneficial one (e.g. therapeutic antibodies, which have formed aggregates due to inappropriate storage conditions). The answer was to connect an absolute light scattering detector to the separation system.

Traditional light scattering instruments worked by taking readings from multiple angles, each being measured in series. A low angle light scattering system8 was developed in the early 1970s that allowed a single measurement to be used to calculate the molar mass. Although measurements at low angles are problematic for fundamental physical reasons (molecules tend to scatter more light in lower angle directions than in higher angles, and low angle scattering events caused by dust and contamination of the mobile phase easily overwhelm the scattering from the molecules of interest), low-angle laser light scattering or LALLS became popular in the 1970s and mid-1980s.

The mid 1980s saw the development of multi-angle light scattering instruments9 that were able to make measurements at the different angles simultaneously but it was not until the later 1980s10-12 that the connection of multi-angle laser light scattering (MALS) detectors to SEC systems was a practical proposition enabling both molar mass and size to be determined from each slice of the sample fraction. 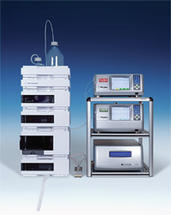 MALS can be applied to synthetic polymers, proteins, pharmaceuticals and particles such as liposomes, micelles and encapsulated proteins. Measurements can be made in one of two modes: un-fractionated (batch mode) or in continuous flow mode (with SEC, HPLC or any other flow fractionation method). Batch mode experiments can be performed either by injecting a sample into a flow cell with a syringe or with the use of discrete vials (scintillation vials or microCuvettes where sample volume requirements are low). These measurements are most often used to measure timed events like antibody-antigen reactions or protein assembly. Batch mode measurements can also be used to determine the second virial coefficient (A2), a value that gives a measure of the likelihood of crystallization or aggregation in a given solvent (useful for protein crystallography). Continuous flow experiments can be used to study material eluting from virtually any source. Wyatt Technology even managed to study the on-going process in a reaction vessel by coupling a reactor bleed to a MALS instrument. More conventionally, the detectors are coupled to a variety of different chromatographic separation systems. The ability to determine the mass and size of the materials eluting then combines the advantage of the separation system with an absolute measurement of the mass and size of the species eluting.

MALS measurements work by calculating the amount of light scattered at each angle detected. This process overcomes the problems associated with low angle detectors (typically there is around ten times the noise at an angle of 11º or below compared to 90º) and allows a reliable and accurate measure of the light scattered. The higher the number of detectors, the better the accuracy of the experiment.
The molar mass and size are calculated by producing a Debye plot for each data slice: 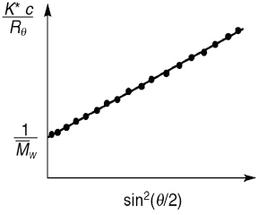 Why Use Light Scattering?

The addition of a MALS detector coupled downstream to a chromatographic system allows the utility of SEC or similar separation combined with the advantage of an absolute detection method. The light scattering data is purely dependent on the light scattering signal times the concentration; the elution time is irrelevant and the separation can be changed for different samples without recalibration. In addition, a non-size separation method such as HPLC or IC can also be used.
As the light scattering detector is mass dependent, it becomes more sensitive as the molar mass increases. Thus it is an excellent tool for detecting aggregation. The higher the aggregation number, the more sensitive the detector becomes. 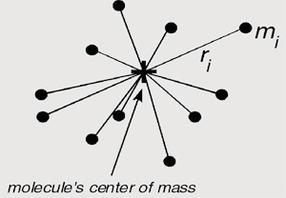 Figure 4: RMS radius of a molecule 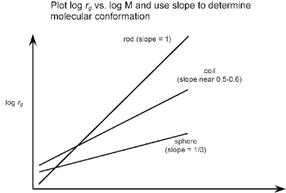 This may seem like a strange parameter to measure but in fact this is very useful as it is sensitive to changes in shape of the molecule. If you consider adding a side group to a large molecule (branching), this would hardly affect the Rh but would have a significant impact on the Rg. In addition, if you plot the Log Rg vs. Log M then the conformation of the molecule can be derived.

If there are any shape changes which are associated with changes in molar mass, they will be identified, as shown in Figure 6:. 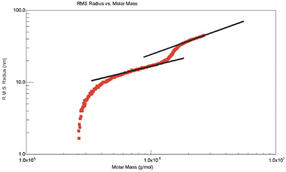 Multi-angle light scattering coupled to SEC or other fractionation methods can provide an absolute means for measuring the molar mass, size and distribution of proteins, polymers and particles of all sorts. Wyatt Technology’s MALS also enables the elucidation of additional data such as branching, conformation, and eluent behaviour. The same instrumentation also allows observation of molecular interactions in a real-time environment.
As MALS is an absolute mass and size measuring technique it is insensitive to the separation mechanism and as such is ideal for both highly variable research applications as well as routine quality assurance of previously characterised samples.