When determining particle sizes a wide variety of techniques are used in which sieving may be the most popular. Sieving is a relatively simple technique, despite the fact that of course different instrumental approaches can be used. The main advantages of sieving are the low price of the instrumentation and the fact that different fractions of the original sample can be prepared for further use. On the other hand, sieving is very time consuming and yields results only for a very limited number of particle sizes. Results from sieving typically vary due to several factors: the method of moving the sieve, the period of operation, the number of particles on the sieve and some physical properties such as shape or stickiness of the sample. In addition, the actual size of the mesh gaps of the sieves can have large variations from the nominal size. All these and some others limit the accuracy and precision of sieve analysis and are reasons for this technology being widely replaced by light scattering methods, especially for sizing particles smaller than a few millimetres. 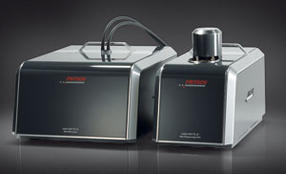 How to get the particle size
Static laser light scattering can be utilized to cover a particle measuring range from approximately ten or twenty nanometers up to a few millimetres. When a laser beam illuminates a particle, light scattering is observed and from the angular intensity distribution detected behind this scattering event, the particle size can be calculated. Therefore we say laser light scattering is an indirect method of particle size measuring, just like many other techniques where some specific physical properties are measured; from the obtained values the particle size is then calculated. The physical theories that support this calculation are the Fraunhofer theory for rather large particles and the Mie theory that applies not only to large, but also to small particles. Now how are large particles or small particles defined? Typically “small” means the particle has a diameter not larger than the wavelength of the laser light illuminating the particles. Typically Laser Particle Sizers are using laser light with a wavelength between possibly 500 and 700 nm. Therefore the transition between Fraunhofer and Mie should take place in the region of about 0.5 – 1µm. However, the decision of whether using Mie or Fraunhofer may not only depend on the particle size, but also on the sample material and the exact application.

During the wet dispersion, the sample powder or suspension is added to a closed circuit filled with an appropriate liquid. This mixture is pumped continuously through a measuring cell where the laser beam can illuminate the particle ensemble. During the pumping in the measuring circuit, ultrasound can be applied to the system helping to destroy the agglomerates in order to generate single, separated particles. Care must be taken that not too much material is added to the measuring circuit since multiple scattering processes may alter the result of the measurement. Multiple scattering means: light that was once scattered by a first particle is now scattered on a second particle before leaving the measurement cell. To ensure that the correct amount of material is used, the beam obscuration is observed during the feeding of the sample material to the system. The beam obscuration simply gives the percentage of light that is scattered away from its original path. A value of 10 – 15% has proven to be a good value for the beam obscuration ensuring a reliable measurement. 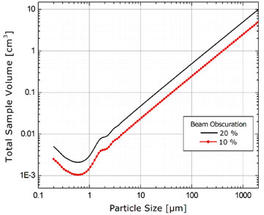 Picture 1: Calculated total volume of sample material needed to get a beam obscuration of 10 and 20%. The calculation was performed using the Mie theory with optical parameters of Alumina. For a particle size smaller than about 1µm the required amount of sample material will be significantly influenced by the refractive index of the material.

Picture 1 shows the volume of sample material needed to obtain 10% or 20% of beam obscuration in a FRITSCH ANALYSETTE 22 MicroTec plus Laser Particle Sizer as a function of the particle size. As can be observed large particles require a much larger amount of material, while very little material is needed for small particles. Below about a particle size of 0.5µm, the amount of material increases again and the exact value depends here not only on the particle size, but also on the refractive index of the material, which is not indicated in picture 1.

Some materials can hardly be measured in liquid. Maybe they dissolve in water and also in any organic solvent, or they face some chemical reactions. Or effects like the swelling of e.g. wheat in water occur, which prevent measuring in a wet medium. In those cases the dry measurement is a real alternative. Here the material is accelerated in an air stream through a so called Venturi nozzle and expands rapidly behind the nozzle, where the highly turbulent stream rotates the agglomerates quickly and they collide with other agglomerates and particles. Due to these interactions, the agglomerates fall apart and single particles can be measured. However, compared to the introduction of ultrasound in water, this process is much less effective, limiting the dry dispersion measurement to the smallest particle size in the range of a few micrometer and also strongly depending on the physical properties of the material. Wet, fat containing, as well sticky materials are of course much more difficult to disperse in an air stream then dry and easy flowing material. To enhance the efficiency of the dry dispersion process some instruments incorporate baffle plates which the material stream is accelerated onto. When hitting these baffle plates, agglomerates are destroyed effectively, but unfortunately especially for soft material, milling of the primary particles also will occur. The resulting particle size distribution will in those cases depend on the pressure of the air used to accelerate the material stream.

Some applications require agglomerates not to be destroyed at all. Or the sample material does not tend to create agglomerates. In those cases a falling chute can be used to feed the sample material to the measuring zone. Now a continuous feeding of the material is established by e.g. a vibration feeder and the particles simply fall down into the measuring instrument. They now may be collected or drawn out with a vacuum cleaner.