Advances in genetic engineering and cell culture technology have raised upstream productivity in the production of recombinant proteins. Increased titres of up to 10 g/l stress the need for highly efficient and robust downstream processes (DSP). Most industrial bioprocess development groups apply generic DSP platforms that are designed to purify various candidates of the same class of proteins applying the same process design (1). Besides various filtration and virus inactivation steps, they usually involve two or three chromatographic unit operations with orthogonal separation modes. The use of high capacity chromatographic resins can help to overcome the DSP bottleneck by increasing process throughput and robustness. High sample amounts can be loaded and higher velocities applied without changing existing columns and other hardware.

Finding the best conditions for each chromatographic unit operation is of critical importance to establish a robust and efficient biopharmaceutical manufacturing process at large scale. Today the Design of Experiments (DoE) methodology and high-throughput screening (HTS) tools support efficient resin screening and method development. Applying these technologies also contributes to a better process understanding by increasing ‘prior knowledge’. This is mandatory when following the Quality by Design (QbD) approach to establish robust and validated platforms.

Other strategies are focusing either on reducing the number of chromatographic unit operations to a twostep process, or on developing non-protein A platforms. Eliminating a protein A step would overcome the known drawbacks of protein A chromatography such as high resin costs, protein A leaching and the formation of aggregates due to the acidic conditions needed for elution. Recently Lain et al evaluated the use of cation exchange chromatography as a mAb capture step to replace the protein A step (2). They developed a high capacity capture step for mAbs based on Toyopearl GigaCap S-650M.

A broad range of commercial chromatographic resins can be applied in large-scale mAb purification. Base particles range from soft agarose based matrices to porous glass and more rigid polymer and silica-based matrices. Common processes often combine resins of various suppliers in order to achieve maximum performance for each single step. Besides binding capacity, purity, robustness towards sanitisation and cleaning-in-place, the mechanical properties of the resin also have to be taken into account when selecting the chromatographic resin for a specific step. The rigidity of the resin influences both the ease of column packing and the bed stability in large-scale industrial columns at high velocities.

Toyopearl® resins are based on a rigid, cross-linked polymethacrylate particle. The high mechanical stability pays off in excellent pressure flow characteristics and straightforward column packing. Now, that the first Toyopearl based protein A process resin – Toyopearl AF-rProtein A-650F – is being introduced, a complete mAb purification platform based on Toyopearl can be established.

A generic mAb process assumes that a pre-defined purification template works for all monoclonals. However, physicochemical differences among mAbs require a flexible platform approach. The overall scheme of the downstream process and the limits of operating conditions can be pre-defined, but individual conditions have to be adapted to the specific target mAb. HTS and DoE are powerful tools when defining the design space of downstream processes and considerably speed up parameter scouting.

The results of the CMC study can be used to set up a mAb purification platform based on polymeric high capacity resins. HTS techniques and the DoE methodology were applied to evaluate chromatographic steps for mAb purification. Various resins and method parameters for the protein A affinity step and subsequent ion exchange steps were evaluated. Robotic platforms for parallel microscale chromatography substantially facilitate the screening of chromatographic resins and support a fast optimisation of method parameters (4); they process small screening columns in 96-well plate format in a few hours. Today, high-throughput systems complement or even replace the tedious and sample consuming columnbased screening in many industrial process development groups. 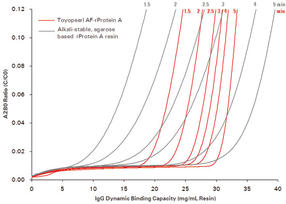 Toyopearl AF-rProtein A-650F is an attractive candidate to improve the efficiency of a protein A based mAb capture step because it retains its high dynamic IgG binding capacity at a broad range of velocities and also when loaded with high titre feedstocks (see Figure 1). Its recombinant protein A derived ligand is attached to the rigid base matrix by multiple stable bonds resulting in low ligand leaching and high stability towards alkaline clean-in-place (CIP) conditions. Different protein A affinity resins, including the Toyopearl AF-rProtein A-650F, packed in MediaScout® MiniColumns (Atoll GmbH, Weingarten, Germany) were tested by varying the binding buffer pH, the sample load and the residence time.

In order to simulate a real feedstock sample, a pure monoclonal antibody (IgG1) was spiked into a Chinese hamster ovary (CHO) cell lysate. Purity and recovery of the antibody in the eluate were monitored. The purity of the antibody fraction was tested by measuring the amount of CHO host cell proteins (HCP), and the amount of leached protein A by immunoassays. Table 1 shows the HCP removal when varying sample load and/or flow rate (residence time) at fixed bed volume and pH. Fractions purified by the Toyopearl AF-rProtein A-650F showed a lower amount of remaining host cell proteins under all conditions tested when compared to those purified by a widely used competitive rProtein A resin providing a similar IgG binding capacity. 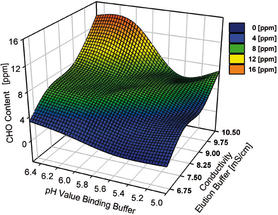 full-screen
Data kindly provided by U Breuninger at the University of Applied Science, Esslingen, Germany

The reduction of CHO proteins (CHOP) was also evaluated for a cation exchange step by varying the parameters protein load and pH, as well as ionic strength of binding and/or elution buffer in a DoE approach. At low pH of the binding buffer, the ionic strength of the elution buffer (shown as conductivity) has no significant influence on the amount of residual HCP eluting from the cation exchange resin (Toyopearl GigaCap CM-650M, see Figure 2). With increasing pH of the binding buffer up to neutral pH values, an increased influence of the ionic strength on the HCP removal can be observed. Similar high throughput screening experiments were performed for anion exchange and hydrophobic interaction chromatography (data not shown). By applying the ideal conditions for each unit operation, various downstream process platform strategies can be simulated easily at lab scale. 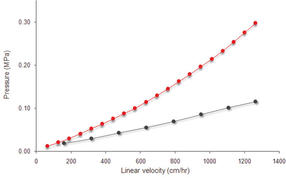 Future challenges of mAb purification will be provided by the further increase in cell culture titres. Chromatographic operations thus become limited in terms of the throughput they can provide. The ability to run a chromatographic purification step at a broad range of velocities and sample loads expands the design space provided by a validated purification platform. The use of resins providing a high mechanical stability and maintaining high protein binding capacities at high velocities supports these requests.

Regina Römling is Marketing Manager at Tosoh Bioscience GmbH, with responsibility for the marketing of separation products such as HPLC columns and process resins. Prior to joining the Tosoh team in 2007, she was a Product Specialist for HPLC systems at Shimadzu. In 1990, Regina graduated in chemistry, specialising in biochemistry, at the Westfälische Wilhelms-University of Münster (Germany). Her background includes five years of research work in molecular biology and genetic engineering at the University Hospital, Münster, and about 15 years’ experience in liquid chromatography and mass spectrometry.

Egbert Müller is Technical Director at Tosoh Bioscience GmbH. He has a PhD in Theoretical Chemistry and a Habilitation in Bioseparation, is a Lecturer in Industrial Biotechnology at the University of Darmstadt (Germany), and is a Group Leader for research grant projects that receive funding from the Bundesministerium für Bildung und Forschung (BMBF, Federal Ministry of Education and Research) in Germany. Egbert serves on the Scientific Advisory Board of the International Symposium on the Separation of Proteins, Peptides & Polynucleotides (ISPPP), and is a member of the Society for Affinity and Molecular Recognition. He is owner of more than 30 patents for surface modification techniques of chromatographic resins.