Different methods of vacuum regulation in rotary evaporators are compared according to their benefit for the user. Essential criteria of such analyses are process time, rate of solvent recovery, ease of handling, and flexibility. Speed controlled diaphragm pumps with automatic regulation feature obvious advantages and an extremely long performance life of wear parts.

Vacuum as a tool in the chemistry laboratory

Over the years, the diaphragm pump has become a standard item in a chemistry laboratory. A variety of applications depend on regulated vacuum pressure.

A typical example is the rotary evaporator that uses adequate pressure to get as close as possible to the solvent's boiling point and to evaporate solvents at low temperatures (fig. 1). With pressure being too high, evaporation will take too long and with pressure being too low, substance may start foaming.

The method of regulation is essential for all aspects of performance, economy, and environment. It is unheard of today to adjust the hot bath temperature by hand. A skilled user with enough time, could readjust the temperature with a rotary knob just as well as an electronic control circuit but these people are rare in the modern labs. Today very few people use a mercury thermometer but an electronic control with at least PID characteristics instead.

With some patience, the manual system will reveal proper results but most of the users do not want to monitor the pressure over hours. For this point we need to imagine that a hand-regulated valve will not adjust pressure but suction power instead. During the evaporation process, temperature and solvent composition change continuously. Hence, boiling pressure drifts and the user must readjust the valve by hand permanently. In today's science with its high cost and little time, such action is not adequate.

As a solution, we need to think about developing automatic vacuum regulators which at least maintain a pressure level once set. This is state-of-the-art today. A conventional method is flow regulation by a 2-point solenoid valve. The pump runs at full power all the time and as soon as the actual pressure exceeds a selected nominal value (nominal plus hysteresis), the valve opens and the system is evacuated suddenly until nominal pressure drops below the nominal value. Such systems used with appropriate knowledge and care will deliver acceptable results.

Simple regulators involve problems with pressure "undershoot" or "flutter" which may cause foaming or boiling over of the solvent. Another problem is that such systems with their typical high hysteresis work above their optimum operating pressure most of the time. Low efficiency goes hand-in-hand with long evaporation times and moreover, most of the usual vacuum regulators do not really work automatically and the user needs to know and select the adequate nominal pressure and hysteresis. Unfortunately, such values are different for every solvent mix and temperature.

With evaporation having started, temperature in the evaporating flask is determined by heating power of the hot bath and evaporation heat of the solvent and hence, the quantity of the solvent. Some manufacturers try to compensate for this fact with pressure steps or ramps; this in turn increases the number of vacant parameters that need to be programmed in the controller. How should the user know about the optimum pressure curve ? These systems are unable to detect and control boiling pressure levels automatically. Such control action would not be reasonable with a "coarse" method of vacuum regulation, i.e. not using more than one single "open/close" valve. 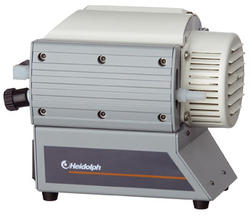 This approach features continuous vacuum regulation by a speed-controlled motor driving a diaphragm pump. This concept is simple; the economic realization of a frequency control requires detailed technical knowledge.

Last but not least, integration of a PID-controller will show all of its talents: undershoot, overshoot and similar deviations are history (fig. 2: Rotavac vario control, by Heidolph Instruments).

Evaporation and drying are intricate processes influenced by a variety of parameters. Simple sequencers for speed-controlled diaphragm pumps hardly show any advantages over "open/close" valves since they also depend on the user programming nominal pressures.

Fully automatic regulators detect boiling point (based on vapor temperature), or boiling points of various substances in the solvent. They approach these points "softly" without any overshoot and follow-up temperature changes in the hot bath. The regulator exactly controls pressure as required by the specific boiling point to achieve an as short as possible process.

The principle of continuous vacuum regulation is shown in fig. 3. Instead of the typical flutter of the actual pressure around nominal is typical for an "open/close" valve control, a continuous approach and follow-up of boiling pressure is reached.

This time saving will cut down process times and hence, cost. Integrating daily labor cost while using conventional pump stations in a "cost of ownership" calculation, speed-controlled systems with boiling-point follow-up turn out to be the most effective ones. 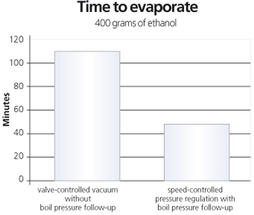 The speed-controlled system allows for highly efficient distillation. The solvent recovery rate is close to 100 %, a value you hardly achieve with a simple manual "regulation" or programmed pressure steps.

With "open/close" valve systems, a significant quantity of solvent gets into the pump when undershooting nominal pressure which in turn will cause condensation problems in the housing and valves. In particular, 2-cylinder diaphragm pumps are prone to condensation and need gas ballast that in turn affects final pressure. The only solution is a 3-stage pump, preferably with speed control.

We would like to thank Dr. Jürgen Dirscherl, engineering director of Vacuubrand for his friendly support and supply of information.