Lithium ion battery technology offers many advantages in portable power application but one major concern is safety – thermal runaway of the device in both normal and abusive situations. In the following article, it will be shown that by means of adiabatic calorimetry, it is not only possible to test single components but also complete lithium ion batteries. From this information batteries can be evaluated for their hazards potential, but more importantly, these tests can be used to design inherently safer cells, providing key design information during the development process – reducing development costs and increasing product safety.

A rising consciousness of the shortage of fossil fuels has greatly increased efforts in the area of “green energy” in recent years. Utilization of important energy sources such as the sun, wind, water, geothermal energy and biomass will also lead to a decline in our dependence on large power plants in the future and ultimately to more decentralized power generation practices. The fi elds of energy transport and energy storage are also closely associated with this development. Furthermore, we have become accustomed to the convenience of many cordless electronic devices like tools, mobile phones, laptop computers or cameras which all run on rechargeable batteries. The primary development objectives for such batteries include a long service life, a multitude of complete charging and discharging cycles, and a continuous release of the stored electric energy. Especially those batteries based on lithium ion technology have been increasingly used due to their superior performance characteristics over previous technologies. However, one of the major drawbacks of lithium ion batteries is the chance for thermal runaway to occur. Therefore, special attention must also be paid to the safety measures associated with the use of such energy storage devices.

By means of a “worst-case scenario” (thermal runaway) scheme, adiabatic calorimetry can provide many pertinent answers, including the temperature at which lithium ion cells or their components can exhibit a highly exothermic reaction during use or storage, the amount of energy released during such a reaction, the speed of the reaction, and the pressure levels arising as a result of the decomposition gas formed. The “United States Advanced Battery Consortium” (USABC) therefore calls for a “worst-case-scenario” test with an Adiabatic Calorimeter (ARC) in its Safety Testing Manual, SAND99-0497, in which entire, fully charged batteries are to be tested.

In order to guarantee an adiabatic measurement environment, heat exchange between the sample and environment must be prevented. This can be achieved by tracking the temperature of the calorimeter’s heater parallel to the heat which is produced by the reaction of the sample. The control and regulation of the calorimeter are carried out in line with the temperature development of the sample. When differences in temperature between the sample and environment are prevented from occurring, no heat exchange or heat loss can occur either, and the sample can be investigated under adiabatic conditions. 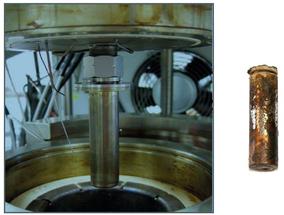 A standardized measuring technique is the “heat-waitsearch” program. Here, the sample is initially heated to a temperature just below the expected reaction temperature. If no further self-heating then occurs, the temperature is increased stepwise until the sample temperature exceeds a certain threshold value within a given period (usually 0.02 K/ min). The calorimeter is then switched to the adiabatic mode and the control of the calorimeter is carried out according to the temperature development of the sample as described above. For the analysis of lithium ion batteries, special sample containers are available allowing the above-described “heat-wait-search” program to be carried out on an entire “18650” cell (fi gure 2). 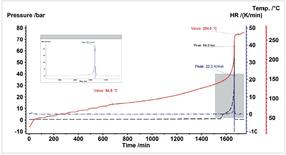 This part of the exothermic reaction results from the decomposition of the solid electrolyte interface (SEI). The temperature of 85°C is the relevant value for assessing the thermal stability and safety of the cell. After 1600 minutes, the decomposition reaction accelerates rapidly, associated with an increase in temperature and pressure. This second part of the reaction results from an internal short circuit and is due to the decomposition of the individual components. An adiabatic temperature difference of 160 K can be seen, as well as a pressure increase in the sample container to 64 bar. This pressure increase is an important value for the design of the pressure relief valve in the cell. 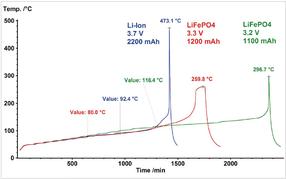 Comparison of the results of three “18650” cells, “heat-wait-search” program

Figure 4 shows a comparison of the results for three “18650” cells (lithium ion cells). Lithium iron phosphate cells are characterized by good raw material availability and low price. The capacity of lithium iron phosphate (LiFePO4) cells, at 1200 mAh and 1100 mAh, is considerably lower than the capacity of cells made of lithium cobalt dioxide (LiCoO2, 2200 mAh). At 80°C, 92°C and 116°C, there is a signifi cant variance in the temperatures at which the self-heating of the decomposition reactions start. The thermal load capacities of the investigated cells therefore also vary considerably, making it possible to draw conclusions with regard to usage safety. Also, the maximum temperatures reached with lithium iron phosphate cells, at 260°C and 297°C, are considerably lower than that of the lithium metal cell (473°C). This value is also relevant for safety, since it can be correlated to the energy released during decomposition.

In addition to its other applications, a NETZSCH ARC® 254 Adiabatic Calorimeter is capable of investigating entire lithium ion batteries (“18650” cells) in an adiabatic environment. The measurement results – consisting of an adiabatic temperature increase, temperature increase rate, pressure increase, pressure increase rate, and the temperature at which thermal decomposition begins – allow for the classifi cation of individual cells with regard to their potential risks and hazards, and for the comparison of cells made from different components. Lithium iron phosphate cells have thereby been determined to be signifi cantly safer than lithium metal cells. Measurement data can thus be used not only for cell construction and design, but also for conclusions to be drawn regarding proper handling, thermal safety and the degree of danger associated with improper storage or use.

Dr. Ekkehard Füglein studied chemistry and received his Ph.D. specializing in Solid-State Chemistry. Since 2002, he has been employed in the applications laboratory and in the fi eld of applications consultancy for thermal analysis at NETZSCH-Gerätebau.

As of July 2008, Sonja Eichholz has been employed as a chemist in the applications laboratory at NETZSCH-Gerätebau and has been responsible for gasanalytical couplings (FT-IR, MS and GC-MS) and DMA.