Many materials in use today are disperse systems where one substance (often particulate) is dispersed in another phase. These material types include adhesives, agrochemicals, cement, ceramics, colloids, cosmetics and personal care formulations, food and drink, mining and mineral slurries, paints, inks and surface coatings, pharmaceuticals and polymer systems.

This “Ten Ways” guides you through some of the fundamental properties of the dispersed system, and demonstrates how these affect the rheological properties. Whereas it in interesting to understand the bulk material properties, such as rheology, which are associated with the changes in the particle size, shape and zeta potential, these examples will also demonstrate that this understanding allows the rheology of the material to be controlled. 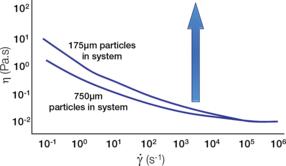 1 Decrease the particle size and the viscosity generally increases. 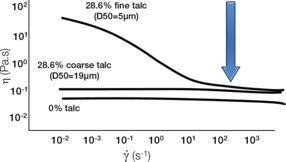 2 Increase the particle size and the viscosity generally decreases.

Conversely, if the particle size is increased, this leads to a smaller number of particle-particle interactions. Again, due to the weak nature of this association, the effect is seen most dramatically at low shears. 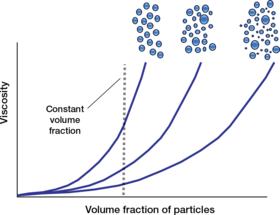 3 Increase the particle size distribution (span) and the viscosity decreases.

Particles which have a wide span / distribution (large polydisperity) tend to pack better than a system of particles of all the same size (a narrow distribution). This basically means that a wide distribution of particles has more free space to move around, which therefore means it is easier for the sample to fl ow, i.e. a lower viscosity. So, tightening up the particle distribution can increase the stability of a system.

4 The effect on the viscosity of particle size and particle size distribution can be used in combination for some interesting effects.

This is basically due to the two competing effects of changing the number of particle-particle interactions on changing the size and also changing the polydispersity. Both affect the viscosity, however, in this case, the effect of polydispersity dominates at one particular ratio. 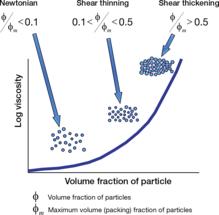 5 Increasing the number of particles in a system to change the flow behaviour.

6 For particles smaller than a micron, i.e. colloids, increasing the magnitude of the zeta potential (either +ive or –ive) increases the lower shear viscosity.

As the zeta potential is increased, the particles are forced to stay away from each other. This is basically preventing the particles from flowing freely, hence the viscosity increases. The effect is seen more at lower shear rates as this is a small force. 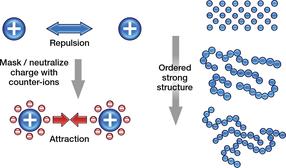 7 For particles greater than a micron, i.e. dispersions, (where gravity now has a significant effect) at high concentration, decreasing the zeta potential towards the iso-electric point to take advantage of the secondary minimum can create a self supporting gel system to introduce a yield stress to the system. 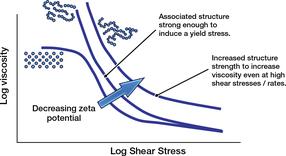 For larger particles, the settling force of gravity on the particles will overcome any repulsion of the particles due to the electrostatic charge / zeta potential. However, as these large particles can no longer fully aggregate (hydration layer), this close range, yet strong, Van der Waals attractive force can increase the low shear viscosity. 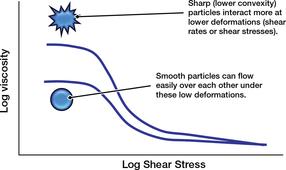 8 Smoother particles have a lower low shear viscosity than those which are sharp/non-smooth (i.e. a lower convexity). 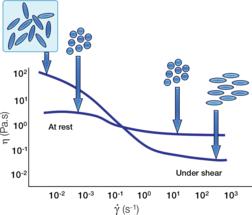 With spherical particles, there are typically particle-particle interactions which break down under shear to give a shear thinning behaviour. However, with elongated particles the random orientation leads to a higher barrier to start flow; an increase in low shear viscosity. However, under shear, these elongated particles can orient themselves to bestreamlined with the direction of flow. They are therefore easier to flow, resulting in a lowershear viscosity than the spherical same size equivalent. 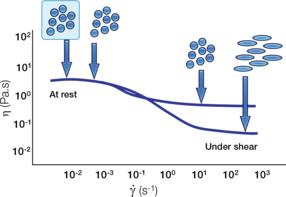 10 With particles of the same size, soft/deformable particles tend to have a more shear thinning behaviour than their hard/rigid equivalents.

With soft particles, a forced shear can change the shape of the particle. This can lead to the particles elongating and aligning under shear resulting in a more shear thinning system.