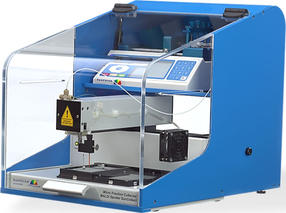 During the last years, matrix-assisted laser desorption/ionization (MALDI) mass spectrometry has been subject to considerable improvements. Whereas the focus of MALDI before has mostly been on the analysis of peptides and proteins (proteomics), the development and progress of MALDI imaging have clearly expanded its options. The aim of MALDI imaging is to provide localized information on diverse analytes in various materials. Predominantly, the examined samples are thin tissue slices of different origins.

MALDI imaging mass spectrometry involves the visualization of the spatial distribution of proteins, peptides, pharmaceutical compounds and their metabolites, biomarkers or other chemicals within thin slices of sample such as animal tissue or plant. It is a promising tool for putative biomarker characterization and drug development. Initially scientists take tissue slices mounted on microscope slides and apply a suitable MALDI matrix to the tissue, either manually or now automatically.

Next, the microscope slide is inserted into a MALDI mass spectrometer. The mass spectrometer acquires the spatial distribution of molecular species such as peptides, proteins or small molecules. Suitable image processing software can be used to import data from the mass spectrometer to allow visualization and comparison with the optical image of the sample. Recent work has also demonstrated the capacity to create three-dimensional molecular images using the MALDI imaging technology and co-registration of these image volumes to other imaging modalities such as magnetic resonance imaging (MRI).

The advantage of mass spectrometry is its ability to identify a wide diversity of molecules. Those may be small molecules such as drug candidates and their metabolites, as well as larger biomolecules like peptides and lipids, or even intact proteins.

Due to the diversity of possible applications MALDI imaging now plays an important role in many scientific fields. Under those, pharmaceutical research is certainly one major area.

Sample Preparation with the SunCollect instrument

The SunCollect is a small and space saving bench top instrument. The spray head moves quickly and continuously over the sample. Pneumatic atomization is used to spray matrix or enzyme solution onto a MALDI sample plate or glass slide. The compressed air which is produced by the provided compressor could be easily replaced by pressurized nitrogen. This ensures constant spray conditions independent from external influences like air humidity or oxygen. Further, nitrogen prevents oxidation of analytes, matrix or enzymes.

Most homogeneous MALDI matrix deposition. CHCA (10 mg/ml) sprayed with SunCollect on a glass slide results in Crystal size between 5 and 20 µm.

MALDI imaging measurements critically depend on the preceding sample preparation. Here, the essential point is the deposition of matrix solution, which has to fulfil two tasks. The first one is the extraction of analyte molecules from the tissue and their incorporation into co-crystals. The second task is the ionization of analyte molecules during the MALDI process. Currently, the SunCollect spotter is the most suitable instrument for this challenge. It successfully addresses both requirements during the matrix-spray process: on the one hand, a highly efficient extraction process is needed to achieve good sensitivity when measuring the tissue sample and the analytes have to get incorporated into the crystals. On the other hand, a rapid drying of the matrix solution is required in order to achieve both homogeneous crystallization and high spatial resolution due to small crystal size and low dispersion of small molecules. 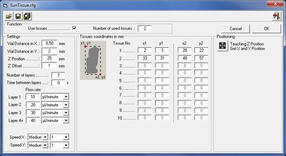 All those depend on the tissue, the analytes, the solvent and the used matrix. The advanced micro spray technology, combined with a software tool that allows the user to optimize the parameters of the spray procedure individually for each sample, makes this instrument superior to other methods and instruments. Standard methods are part of the provided manual and can be easily adapted to user-specific questions.

Various layers of matrix are applied on the tissues: The first layers with low matrix deposition generate seed crystals on the surface and subsequent layers made with higher flow rates to extract the analytes out of the tissue in the end.

Distribution of two Benzyl-alkyl-ammonia homologues in rabbit eye after DHB spray deposition with SunCollect and its amazing ultra-high resolution.

This study of benzalkonium salt distribution in the eye demonstrates MSI's pertinent application in ophthalmology, an area that has recently gained growing interest. The quantification of compound directly in small histological structure of the eye allows knowing local effect of molecules. MSI presents a powerful tool to investigate the distribution of compounds such as BAK, that have known adverse effects and are therefore useful in preclinical studies in pharmacology and toxicology.

Fingerprint analysis plays an important role in the investigation of crimes. Fingermarks can not only be used for the identification of persons, in addition, MALDI imaging methods give the possibility in analysing chemical substances the owner of the fingermark had been in contact with. 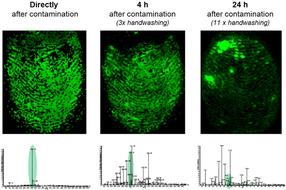 Cocaine-distribution on a fingermark after contamination. Mass spectra show summed intensities. Even after 24 hours and hand washing cocaine could be detected.

In a simple experiment, a test person touched with their finger the inner wall of a vial which had included cocaine (Mr=303,36 g/mol). After that the person made a fingermark on a stainless steel MALDI sample plate. This fingermark was covered with MALDI matrix by spraying with the SunCollect instrument and subsequently analysed with a MALDI mass spectrometer.

Additional fingermarks were taken 4 and 24 hours after contamination with cocaine. During that time, the test person washed their hands several times. This fingermarks were analysed like the first one.

While the analyte is highly concentrated at the beginning, the intensity of the signal decreases over the time, especially when comparing the signal intensity to the matrix signals. But even after 24 hours cocaine could be identified on the test person’s finger. By addition of an internal standard to the matrix solution a quantitative analysis could be possible. The advantage of this method is the identification of a person with their fingermark in combination with the proof of the occurrence of an illegal substance.

It has to be admitted that a fingermark which was taken and analysed before contamination showed no signal with cocaine. This is very important especially considering that people who frequently handle banknotes may find their hand become contaminated with cocaine.

The SunCollect spray technique has a number of advantages: