There are about 40 million organic compounds known in the environment [1] which cannot be defined individually with considerable analytical effort and in short time. Therefore, the so-called sum parameters are used. These parameters reflect effect and material characteristics of one or more substances. The most popular sum parameter in waste water analysis are the BOD (biochemical oxygen demand), COD (chemical oxygen demand), TOD (total oxygen demand) and TOC (total organic carbon). The TOC reflects the organic pollution on the basis of a direct carbon determination. The other parameters are based on oxygen, which is required to reduce or to oxidise the samples' substances.

The BOD (biological or biochemical oxygen demand) can be considered as the 'mother' of the sum parameters. It had been already found and defined in the 19th century [2], apparently as a consequence of the canalisation of the big cities. The canalisation had provided definitive advantages for hygiene. Waste water and refuse had started to be taken underground by channels. However, these waste water had a high oxygen demand and led to an oxygen deficiency in water bodies, into which the waste water was discharged. Hence, the oxygen content of these water decreased to zero. A higher fish mortality was the consequence. Since then the engagement with biological and biochemical oxygen demand has intensified. In the following years, further parameters have been defined.

Due to the 5 day analysis time and the measurement of the carbonaceous BOD instead of total BOD, the BOD5 is not suitable to assess the current capacity of the waste waters' degradation by bacteria. The BOD5 is only a time-delayed information about the pollution of waste water and cannot be used for optimization or control of a WWTP. Alternatively, BOD analysers or respiration analysers can be used, which enable measurements within 5 to 60 minutes. Thus, estimations can be made promptly for the biodegradability of the waste water and its behavior in the plants.

The market is dominated by short-time respiration measurements by O2 electrodes. Due to the low oxygen solubility of the waste water, the small respirations are extrapolated to the final result by using factors.  Essentially, only the easy biodegradable substances are detected this way.

Alternatively, LAR AG provides an online respirometer that operates like a miniature waste water treatment plant: The BioMonitor. This BOD analyser degrades nitrogen and carbon compounds in special waste water cascades, so that the significant total BOD is determined. Due to the multi-stage cascade structure also difficult to degrade components are reliably detected. The oxygen required for the degradation is measured by an O2 sensor. Especially advantageous is the use of the plant's activated sludge, whereby the conditions at the WWTP are simulated reliably.

The COD value has been developed analogically to the BOD measurement. Since there are many organics which are rather hard or not possible to decompose biologically, a parameter has been defined indicating the amount of oxygen which would be needed when all organic ingredients would be oxidised completely. As, according to the name, the oxidation takes place chemically, the chemical oxygen demand can only be defined indirectly. A chemical oxidant is added to the sample in question, the consumption of which is then determined. The internationally dominant method today is the so-called 'Dichromate' method [5][6] which is characterized by the acidification of the sample with sulphuric acid and the addition of silver sulphate. To avoid false measurements in chloride-containing samples, the chloride must be masked by mercuric sulphate first. Due to the application of hazardous chemicals and having an analysis time of 2 hours the method is not suitable for online use.

According to its name, this parameter defines the total oxygen demand of the water sample. It is based on the same principle as the COD. Correspondingly, this parameter has existed already for over 40 years. However, it fell into oblivion in Germany. In contrast, the parameter TOD has been standardized as a reference parameter for the assessment of organic pollution in water in the US.

To define the TOD the sample is thermally oxidised in an oven and the emerging oxygen is measured directly in the carrier gas by a NDIR detector. The TOD value can be affected by inorganic compounds. However, these influences are generally very small and thus enables a mathematically compensation. The parameter is particularly suited for the correlation with COD and BOD, since inorganic carbons do not affect the correlation and the non-carbonaceous BOD (nitrogen compounds) are also considered. Due to the similarities of the determination of the TOC, the TOD is well suited for online monitoring.

The content of TOC in water also reflects the organic contamination. As the name of the parameter already suggests, it is supposed to and has to detect the total organic carbon of the sample. Therefore, the inorganic carbon, literally carbon dioxide dissolved in water and its dissolved ions, have to be excluded from the sample (see Fig. 1).

Generally, the determination of TOC is done by thermal or wet chemical oxidation, so that CO2 is formed, which is subsequently measured by a NDIR detector. TOC measurements are well suited for online measurements since its provides fast and meaningful results depending on the function of the process analyser. The TOC takes a special position in well-known regulatories.

Correlations between COD and TOC

Conventional COD methods are based on the principle of the dichromate oxidation, so that often customary environmental and safety conditions are not met. Furthermore, the method is difficult to implement for the online operation. This leads to an increased tendency to replace the COD by TOC. The background for the legitimate concern is based partly on the ignorance of the TOD method.

Correlations between TOC and COD are defined in the German waste water ordinance (AbwV) and can be determined for each substance. Of course, using such measurements, correlation factors for unknown mixtures can also be detected. However, to be able to use such a factor with online measurements, it is required that the water and its mixture of substances does not change in their composition.

Stating danger, as well as the poor automation of the COD method as main reasons for replacing it with TOC, then in the first instance, according to our knowledge today, the TOD method should be of particular relevance. The technical complexity of a TOD analyser complies with the TOC analyser but without any analytical problems evolved from the inorganic carbon. The analysing times are appropriately similar, the results are present within a few minutes, and additionally, both parameters can even be realised with only one device. 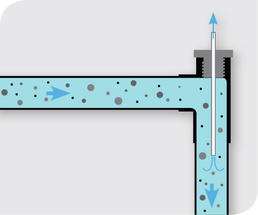 Sample preparation is a crucial criterion for the accuracy and reliability of measuring results. Hence, particles which contain organic carbon should be considered during the measurement [8]. Other particles that do not contribute to the sum parameters, such as sand, may be neglected in the sample preparation.

The LAR FlowSampler is an optimal sampling system that sucks the sample through a stainless steel needle, against the main flow direction, into the analyser. On respecting predetermined specifications the FlowSampler separates big and heavy particles resulting in a sample, which corresponds up to 98% to an expert grabbed sample.

The continuous monitoring of various water presents huge challenges for the online measurement. In general, the following rule applies: The more diverse the application, the more different are the requirements for the analysis system.

Common products can only be adjusted or be equipped with modules and multiple furnaces. Often, the second reactor is used for security if the first one does not work or has been clogged by salts. Other analysers are fitted with homogenisers, but due to their low rotation speed these devices work like a sieve.  Instead of putting the sample into a homogeneous condition, particles are filtered out by this step – even though these particles may contain important components. Alternatively, with its Quick-series LAR AG provides specialized analysers that are designed for the applicative requirements of different applications. Thus, the use of a second reactor is superfluous because high salt concentrations can be treated easily with the high-salt option, that enables the handling of salt concentrations up to 30% sodium chloride (NaCl). Depending on the sample matrix, LAR's analysers differ in their injection system.

For samples with a high particle density and up to 50,000 mg/l TOC, a robotic injection system is used. Here, the amount of tubes and wetted components has been minimized, so the raw waste water samples can be supplied without filtration to the analyser. For samples with low particle density, a loop injection system is used which seals the sample against contamination from the ambient air. In general, the oxidation process of LAR's high temperature analysers is equal – the LAR ultra high temperature oxidation at 1,200°C. At this temperature, all carbon compounds are completely oxidized. Therefore, the use of catalysts is unnecessary.

In many years of close dialogue with customers, an extremely versatile range of products has been developed, which optimally fulfil the requirements of many applications – the LAR Quick-series.