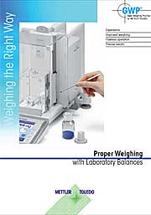 Technological advances in electronics have considerably simplified the operation of balances, drastically cut weighing times, and made the balances so adaptable that they can now be integrated directly into a production process. The risk inherent in this progress, however, is that not enough care will be taken to prevent disturbing influences from the surrounding area. These usually involve physical effects which are measurable for micro, semi-micro and analytical balances, and which analytical balances cannot suppress because they result in measurable weight changes (e.g. through slow evaporation, moisture uptake), or forces which act on the weighing pan and weighing sample (e.g. magnetism, electrostatics) and which are interpreted by the balance as weight changes. The purpose of these instructions is to explain the most important points to be noted when working with micro, semi-micro and analytical balances if high-quality results are required. After some brief pointers concerning the location and proper operation of the balances, the disturbing influences on weighing will be discussed in detail. Most of these influences are recognizable by a slow change in the weight display (drift). Since correct interpretation of the technical data is also of immense importance in the assessment of a weighing result, the most common technical terms are explained at the end.