Wet Agglomeration: An Overview of Techniques

Agglomeration is defined as the "process of particle size enlargement, whereby small particles form larger, permanently stable aggregates, in which the original particles can still be identified. The aggregates’ stability is due to the physical forces between the contained particles or to a binding agent which forms a bridge of material between the particles." [Peter Serne, Peter Kleinebudde, Klaus Knop: "Granulieren - Grundlagen, Verfahren und Formulierungen" (German); Editio Cantor Verlag, 2007]

This definition summarizes all granulation techniques in which the adhesion between the initial particles (typically powder particles) is increased by mechanical energy or a binder. A distinction is made between dry and wet agglomeration. In the dry techniques (compaction, briquetting) the initial particles are compacted into larger pellets by pressure and then shredded to the desired size. In contrast, wet agglomeration (also known as tumble-growth agglomeration) involves introducing a binding agent that creates liquid bridges between the particles which, after drying, leave solid bridges that stabilize the granular structure. Depending on the procedure, the wetting of the powder particles with liquid is performed in different ways and is decisive for the resulting granular structure. This article describes the various methods of wet granulation and compares the resulting specific properties of the granules. 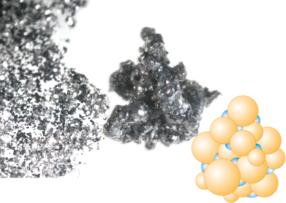 From an initial powdered metal to a fluidized bed aggregate

Fine powders containing swelling substances tend to form lumps when stirred into water. Dispersing such lumps is time-consuming and requires an appropriate stirring technique. In contrast, a porous granulate, in which the fine powder particles are loosely bound, sinks in quickly and is wetted throughout. The water penetrates the void spaces between the bound particles and accelerates the granule’s breakup. There are many different applications for easily dispersible and readily soluble products, from conventional instant consumer products to drinks from vending machines to special medications for patients with swallowing difficulties (dysphagia).

A variety of fluidized bed granules consisting of different materials, but all readily soluble

In a fluidized bed, the process gas stream makes the powdery starting material float while it is sprayed with the granulation liquid, which can be pure water or a binding agent. A nozzle placed above the fluidized bed nebulizes the solution into fine droplets which then settle on the surface of the powder particles and wet these evenly. Upon colliding, such particles form liquid bridges between them. An even wetting of the surfaces is essential for the nucleation process because it ensures the attachment of further particles. The moisture content of the product bed is controlled by the rate of binder added and by the temperature of the gas stream. Throughout the process, it is continuously possible to adjust the nebulization pressure, the temperature and the flow rate of the gas. The agglomeration process is therefore easy to control, which leads to a consistently reproducible product quality.

Formation of the porous structure:

The structure of the evolving granules is influenced by the type of binder and the droplet size of the atomized liquid that is sprayed. For powder wetting and the formation of liquid bridges, the viscosity and adhesiveness of the sprayed liquid are decisive. A spectrum with a narrow distribution of droplet sizes and a homogeneous spray pattern of the nozzle provide the necessary moisture for stable liquid bridges between the particles when these collide. Adhesiveness is a property of the binder that makes it easier for other particles to attach in the agglomeration stage, resulting in bigger aggregates. However, if the viscosity is too low, the binder spreads out over the particle’s surface, resulting in the formation of a thin film that dries too quickly. If the drops of binder are too large, they wet parts of the powder too much, leading to dense granules that cannot be dried sufficiently as the process continues. In the drying stage, the water of the binder evaporates while solid bridges that stabilize the granules emerge from the liquid bridges. Depending on the type of binder, these will be either amorphous and crusty or, when using organic polymers, adhesive and elastic. The agglomeration in a fluidized bed is the only method in which granule porosity can be controlled by such measures as described above.

The granules from a high shear mixer: 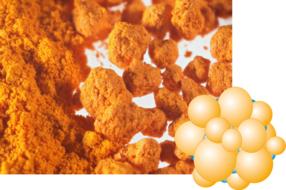 From a turmeric powder to dense high shear granules

The challenge: dust-free, stable granules
Powders flow poorly, they dust when being handled and are difficult to dose. If the material is also allergenic or toxic, comprehensive health and safety measures are required. In addition, many fine powders of organic compounds ignite easily. If such powders come into contact with ignition sources (sparks resulting from electrostatic charges, heat, etc.), devastating explosions can occur. In order to minimise such risks, the powder is brought into a granular format that allows dust-free handling. An important criterion is the mechanical stability of such granules, which prevents them from abrading or breaking when being subjected to significant mechanical forces.

In a high shear mixer, the input powder material is moistened by rapid spraying of liquid. The rotor located at the bottom ensures that the material is stirred smoothly, thereby ensuring thorough mixing and an even distribution of the moisture in the product. The formation of liquid bridges increases the adhesion between the particles during agglomeration. This is characterized by an increase in the torque on the rotor and greater power uptake. With continued growth and compression of the granules, a balance is eventually reached at which power consumption remains steady. Moisture, rotor speed and mixing time are the factors by which the process can be controlled. After the agglomeration stage, the granules are dried in the fluidized bed to the desired residual humidity.

The formation of a dense structure

In contrast to the wetting of the surfaces of individual particles in a fluidized bed, a wet granulator uses a different principle to create granules. The particles adhere to the surfaces of large drops of liquid, are wetted completely and dispersed within the liquid. Ever more particles adhere to the surfaces until saturation is reached. Coalescence leads to further growth of the granules until, due to the mixer’s kneading, no more liquid is transported to the surfaces and the firmness of the granules no longer allows deformation to take place. It is essential to determine the precise amount of binder needed because moisture that cannot be taken up by the product may cause over-granulation and subsequently lead to the disintegration of the granules. Therefore, to absorb any excess water, microcrystalline cellulose (MCC) or other swelling agents should be added to the powder mixture. The controllable process parameters are the rate of adding the binder, the rotor speed and the granulation time. Due to the complex and rapid agglomeration of the particles, the scope for controlling the process with a view to creating evenly sized granules is limited. However, for many applications the shape and size is not decisive, since the focus is on preventing abrasion and breaking of the granules. The propensity for this depends on the product’s properties and the adhesiveness of the binding agent. Adding MCC, however, not only simplifies the process but also increases the stability of the granules. MCC’s fibrous structure forms a felt-like matrix which possesses a high abrasion resistance after drying.

Pellets from an extruder 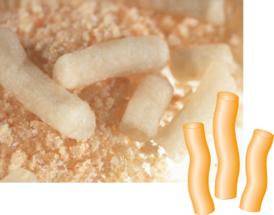 The challenge: Wet extrusion - even denser and similarly shaped granules

Wet granules are dense and mechanically stable, but their shapes tend to differ markedly. Many applications, however, require spherical, ball-shaped granules, also known as pellets. For example, there are active substances that must be released at a certain point in time during the process so that it does not affect the previous reactions. This is typically solved by applying a functional polymer as a coating. But the coating film can only lead to an appropriately reliable substance release if the pellets containing the active substance are similarly shaped, ideally monodisperse and ball-like.

Cellulose can form almost any mixture into ball-like shapes

To start, the active ingredient, the matrix material and the binder are homogeneously mixed in a wet granulator and moistened to a moldable mass, which is subsequently pressed through a perforated die by a basket extruder with an agitator blade. Because this process is performed using moderate pressure, the product’s temperature increases only marginally. The method is thus also suitable for temperature-sensitive materials. The extrudate rods from the extruder fall into a spheronizer and are broken into small cylinders, which are subsequently rounded. In all stages of the process the moisture of the material is the most important parameter for the plasticity of the extrudates. Depending on the desired product characteristics, speed and the dwell time in the spheronizer can be adjusted. The resulting pellets are dried in a fluidized bed and thus gain their firm consistency, which is necessary for further processing.

How an even denser, uniform structure is achieved

Unlike in the high shear mixer, the particles are not created by the way the binder is added and the subsequent mixing to achieve agglomeration. The particle size is basically determined by the hole size of the die. The final particles’ globular shape is a consequence of the wet material’s plasticity, which depends on the properties of the formulation’s components. Swellable substances are necessary to ensure water binding so that as little water as possible escapes as a consequence of the exerted pressure. Excess water would result in clumping during the subsequent spheronization process. If the ingredients have very adhesive properties, is difficult to create even, globular shapes. At the same time, though, the material must have a good binding capacity to ensure that the resulting pellets are sufficiently stable. MCC meets these requirements, giving the wet pellets a good capacity for absorbing water as well as an excellent plasticity and firmness. In addition, MCC forms after drying a felt-like structure which gives the pellets very good mechanical stability.