Microencapsulation – The Clever Way to Target Additives and Active Ingredients 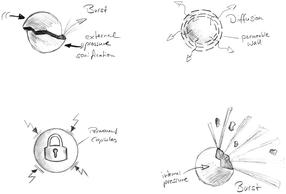 Microcapsules contain and protect their core materials against reactions with the environment, then release this material deliberately at a defined time. The possibility to determine the performance in such an exact way is the reason for the many industrial applications. Numerous microcapsule systems, including natural, semisynthetic and synthetic materials, show how developed this field is.

The following article is based on the most frequently used form of microcapsules, the core/shell type. Here, a liquid, hydrophobic core material is enclosed by a polymeric shell and stabilized. The dense and stable capsule wall protects the core material until the desired release. The mechanism for opening depends on the application and is the most crucial step for functionality.

The capsules used for industrial applications are opened by mechanical force. This is due to the fact that the microcapsules, because of their small size, are very stable in liquid, making them easier to be pumped and stirred without injury. The capsules in powder form are much more sensitive to pressure and shear. Creating strong fixation, as on fibers, allows the capsule shell to be destroyed by low frictional force. Capsule size, wall thickness and the degree of crosslinking determine the stability and breaking strength. Many applications require alternative opening mechanisms to selectively release the contents. Therefore, current developments explore the release, in particular by temperature, PH value, microwave – or- light energy, but also magnetic induction and ultrasound.

Dense, Fragrant, Adhesive, Self-Healing… – An Overview of the Industrial Applications

The most stable and therefore the most industrially used capsules have a shell made of amino resin.

For the permanent encapsulation of phase change materials (PCM phase change materials), the compact amino resin wall offers ideal conditions. PCMs can absorb heat energy due to their chemical properties, by changing their phase from solid to liquid. During solidification, the capsules give back the energy stored. The core material used here are organic waxes that have an exact degree of melting point depending on their composition and chain length of the carbon atoms. To ensure the permanent function of the microcapsules, the capsule wall must be both dense and elastic.

PCMs can especially be found in the textile industry and are used to generate a micro-climate comfort. Fibers and fabrics are stocked with latent heat storage in microcapsules, making the temperature differences for the skin less extreme. In heavy protective clothing for firefighters, police officers and motorcyclists, PCMs significantly help to improve the comfort level. In areas where an even temperature is desired, the effect of the energy absorption and release through PCMs can be very effective.

Another use of microcapsules is for detergents and cleaning agents. Around 10 years ago, microencapsulation technology was recognized as the problem solver for a sustained release of perfumes on fabric surfaces.

Softeners used to be mixed with about 1% fragrance oil to give the laundry a fresh scent. The problem was that a large part of the fragrance oil was lost in the wash and drying cycles. Tailored scent molecules with strong adhesion to the textile surfaces were only available in a very limited fragrance range. Improved utilization of the fragrance oil yield was achieved through microencapsulation. 20-30% of the fragrance oil used now sticks as microcapsules to the laundry and is then released specifically by using friction. Today, with only half the perfume, we achieve a significantly better effect, but with no significant costs due to encapsulation. Due to the success in the fabric softener market, cleaning agents and detergents are now following suit.

A well-known microencapsulation system which has been around for quite some time now is “Scratch and Sniff”. These can be used, for example, in print media to advertise new perfumes. This trend has long since extended to all kinds of packaging. With water – or oil-based paint systems, the subtle effect of the fragrance for promotional purposes is used with a variety of printing processes. Scientific studies have shown that consumers are encouraged not only to buy, but the advertising attributes also stay in the memory, thus creating a significantly greater sustainability of the message. The requirements for the capsules are anything but trivial. The fragrance must be encapsulated for extremely long periods, sometimes years. Once it is time for the fragrance to be released, it should happen with a constant intensity. With volatile substances such as fragrances, this is not an easy task. But, it can be accomplished when using adequately dense cross linked polymer shells.

Paints and varnishes with biocides prevent fouling by microorganisms, algae and lichens as well as the settlement of small marine animals on ship hulls. A controlled release of the ingredients over several years is desired. Encapsulation increases efficiency and improves the handling of the biocides. Recent developments aim to release the biocide only when an organism attaches in order to reduce pollution to the environment. New capsule systems and release mechanisms are therefore required.

The use of the microcapsules in the field of self-healing coatings is being investigated intensely. Like with many products, the origin comes from a NASA project for space exploration. The principle was first published in 2001.The background was the autonomous healing of micro cracks in the heat shield of the space shuttle. Here a coating was successfully developed to fill in cracks by activating a crosslinking agent. This ensured the reliable protection during reentry into Earth’s atmosphere.

The self-healing effects found in today’s coating system market are based on the cross-linking under oxidizing conditions. The capsules, filled with low-viscosity liquids, self-destruct due to cracking and their core materials are then released. Due to the capillary forces, the liquid spreads into the micro cracks. Previously protected from oxygen, they are now exposed and can therefore close the capillary due to the oxidation crosslinking.

Another application in the paint industry is microcapsules which have corrosion inhibitors as the core material. These microcapsules release their core material through mechanical force in order to protect the damaged surfaces from further oxidation processes. In shipbuilding as well as metal coatings of bridges and wind turbines, longer service life can be achieved and maintenance costs can be reduced.

Among various capsule systems, the most common industrial production of core/shell capsules is based on oil in water emulsions.

The two liquids, water (continuous phase) and oil (nuclear material) are presented as a two-phase mixture and are transferred into an emulsion through high shear. At this phase, the wall material is deposited and cross-linked by polycondensation reactions, thus formatting a stable wall. The figure below shows the principle of capsule production and explains it in more detail. 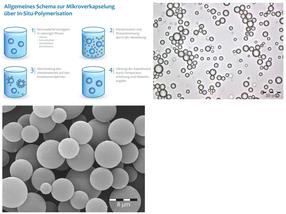 The capsule size reflects the size distribution of the oil droplets in water, which is primarily determined by the stirring speed, the surface energy of the core material as well as the viscosity of the emulsion. Otherwise, the two phases (oil and water) would unravel quickly again without further input of mechanical energy by coalescence and Oswald ripening. Stabilizing the emulsion plays a crucial role. One of the best methods to protect the droplets is by using protective colloid systems. Because of the coulomb interaction, droplets of equal charge repel each other and remain dispersed in the emulsion without influencing the size distribution. Subsequently, the cationisized precondensates from the water phase become attracted to the opposite charged droplets and can then be networked. This step decisively determines the quality of the capsules and requires very precise tuning of the materials and process conditions employed, such as pH value, temperature control and response times.

The wall comprises approximately 10-20 % of the capsule. The ratio is about the same no matter what the particle size is. The diameter stable core/shell microcapsules usually ranges between d = 1 µm and 100 µm. Because there is usually a certain amount of active substance to be encapsulated, the capsule size is predetermined. Conversely, the smaller the diameter, the greater the stability. Due to the large influence of the radius of the volume (at a magnification of the radius by a factor of 10, the volume increases by a factor of 1000), capsule cores and size can be adapted accordingly to each other. One example, fragrance oil encapsulation, shows that the capsule size must be at least 20 microns. This is required to achieve a sufficient burst effect of the fragrance. With this particle size, the capsules are still small enough to adhere to the textile fibers with a sufficient stability.

The Microcapsule: Past Performance and next Generation

Microencapsulation was developed for the production of carbonless paper to replace the carbon paper. Here, a pH –dependent color former is encapsulated in carrier oil. At neutral pH levels, the mixture is colorless and is only colored under acidic conditions. This effect is made use of by coating different layers of paper with microcapsules and acidic components. Through pressure of a pen/printer, the capsules are destroyed and the color former released. It reacts with the acid component of the reactive layer, resulting in a copy of the document. The development was driven by NCR (national Cash Register) and the first commercially produced capsule systems based on gelatin began in 1967. Today, a more economically favorable amino resin system is used. Examples of this application can still be found today such as with bank forms and insurance policies.

In recent years, the activities for industrial encapsulation of substances have multiplied. Capsule systems from acrylate, polyurethane or polyurea offer the possibility to produce formaldehyde-free capsules. Biodegradable capsule systems are another focus. The number of applications has increased and thus also the demand for alternative release mechanisms. A large number of patents from different industrial sectors speaks for the intense research activity in this area.

The light-induced opening of nano- or microcapsules is being extensively studied for use in the agricultural sector and also in medical applications. The problems which arise here are quite diverse. The main difficulty expected is the small depth of penetration from UV light, for example, for the crosslinking and the networking of the wall material. On the other hand the introduction of chemical functionalities into the capsule wall weakens the strength of the system and reduces the stability and tightness.

More promising is the approach to leave the wall untouched and to incorporate the core material into smaller microcapsules. These extremely small capsules are filled with liquid gas and have a flexible shell which expands when the temperature rises like a balloon causing the capsule to burst.

In this way, active substances could be released as heat catalysts, initiators or inhibitors in the preparation of polymer systems for new materials.

Other release profiles such as diffusion, pH change or by enzymatic cleavage of the wall material are just a few requirements that are being intensively explored to provide additional solutions for innovative products.