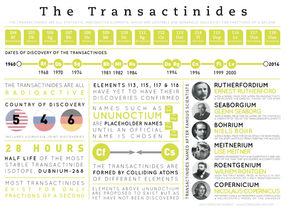 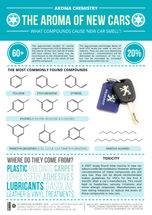 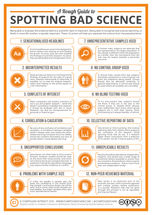 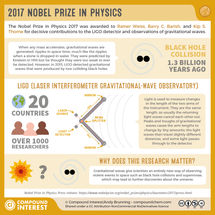 As we head into 2019, it’s time to take a look back at some of the biggest science news stories over the past year. This year’s science news featured water on Mars, the effects of e-cigarettes, new types of isomerism and bonding, and more! 2018 saw a number of significant discoveries in sci ... more

Unleashing our immune systems against cancer

The first of the 2018 Nobel Prizes is awarded. The 2018 Nobel Prize in Physiology or Medicine was awarded to James P. Allison and Tasuku Honjo for their discovery of cancer therapy by stimulating the immune system to attack tumour cells. This graphic takes a look at the prize-winning research. more

The creation of tools made from laser light

After the Nobel Prize for Physiology or Medicine has been awarded, it is physics' turn. The 2018 Nobel Prize in Physics was awarded to Arthur Ashkin, Gérard Morou and Donna Strickland for their pioneering innovations in the field of laser physics. Strickland is only the third woman to recei ... more

The last of the 2018 Science Nobel Prizes is awarded, and it was finally the turn of chemistry. The 2018 Nobel Prize in Chemistry was awarded with one half to Frances H Arnold for her work on the directed evolution of enzymes, and with the other half jointly to George P Smith and Sir Gregor ... more

The Recycling Rates of Smartphone Metals

Regular readers will spot that today’s post is a bit of a twist on an old post from the site’s archives, which looked at the elements present in a smartphone and the roles that they play. In this updated version, I wanted to highlight which elements in your smartphone will actually get recy ... more

The Chemistry of Cherries

It’s cherry season, and the cherry trees are currently heaving under the weight of both sweet and sour cherries. Here we take a look at the chemical differences between the two, and why cherry stones are poisonous. more

The Chemistry of Bell Peppers

Bell peppers come in a range of hues, from fresh greens to vibrant reds. Chemical pigments are behind these, but what changes to cause peppers to travel through this spectrum of colours? Here we take a look at the compounds behind the colours (as well as some pepper aroma chemistry) – and f ... more

Happy Canada Day to all of our Canadian readers! To celebrate, here’s a brief look at some of the different chemicals in maple syrup. more

Raspberries, like all fruits, contain a complex mix of organic compounds. Unlike many fruits, however, raspberries have the less common distinction of lending their name to the compound that is a major contributor to their aroma – and one of the compounds that contributes to their flavour h ... more

Why Chilli Peppers are Spicy

The idea for this graphic came to me whilst saving the chilli peppers from a forlorn looking, aphid-infested chilli plant that’s probably on its metaphorical last legs. I thought it would be quite interesting to look at the origin of the heat in chilli peppers, and how this can be quantifie ... more