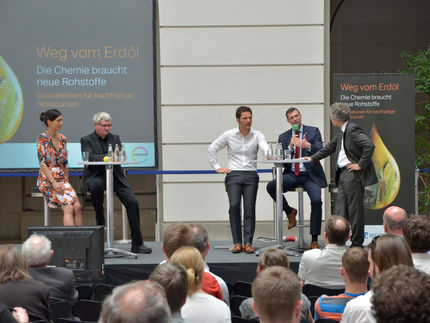 Plants and CO2 instead of crude oil: Panel discussion at the Berlin raw material summit with Sonja Jost, Managing Director of the chemical company DexLeChem; Professor Robert Schlögl, Director at the Fritz Haber-Institute of the Max Planck Society; Steffen Krach, State Secretary for Science and Research in the Senate Chancellery of the Governing Mayor of Berlin; Dr. Markus Steilemann, Chief Commercial Officer at Covestro (from left). Professor Kurt Wagemann, Managing Director of DECHEMA (German Society for Chemical Engineering and Biotechnology) chaired the discussion.

According to experts, the chemical industry needs to increase the use of sustainable raw materials such as plants and CO2 to conserve limited fossil resources. Participants of a raw material summit held on Tuesday at the Technical University of Berlin and organized in collaboration with DECHEMA (German Society for Chemical Engineering and Biotechnology) and the materials manufacturer Covestro called for more joint efforts in this area. Representatives of the political, scientific and business spheres pointed out that there are numerous promising approaches for producing chemical products virtually without petroleum.

In the view of the summit participants, Germany has a leading role to play in this area, also thanks to public funding, a role that needs to be expanded. The full innovation potential has not yet been exploited, however. “Above all, it is important to quickly implement good ideas. That’s why the start-up culture has to be encouraged in the chemical industry in particular,” summed up DECHEMA Managing Director Kurt Wagemann, who held a keynote address and chaired the main panel discussion.

An ideas competition held at the event served as a signal for promoting an increased start-up culture. Five start-up companies from the United States, United Kingdom, the Netherlands and Germany presented to the audience projects in which biomass and CO2 are used instead of petroleum as alternative sources of carbon. Three of them were awarded the accolade of Resource Innovator 2017 and received prize-money donated by Covestro.

From idea to implementation

Also taking part in the subsequent panel discussion was Steffen Krach, State Secretary for Science and Research in the Senate Chancellery of the Governing Mayor of Berlin. Krach said: “Berlin is Germany’s start-up capital. We want to even improve the general framework.” Professor Schlögl complained about a missing willingness to take risks. More technology centers are essential to make it from the idea to the implementation.

According to Jost, the summit showed that the megatrends and future topics of digitalization and sustainability already dominate the chemical industry. “Our solutions are generating completely new types of green business opportunities”, she said.

Steilemann pointed out how important and fruitful cooperation between research-based companies and application-oriented academia is. “Such cooperation has enabled Covestro to rapidly develop and launch the first CO2-based products on the market.“

TU Professor Schomäcker also strongly favored the expansion of cooperation especially within the academic sphere to drive research forward in a focused way. He cited the UniCat excellence cluster as an example, which brings together scientists and engineers from various universities and institutes in the Berlin area and creates synergies.