How Do Hay Fever Medications Work?

The Chemistry of Hay Fever 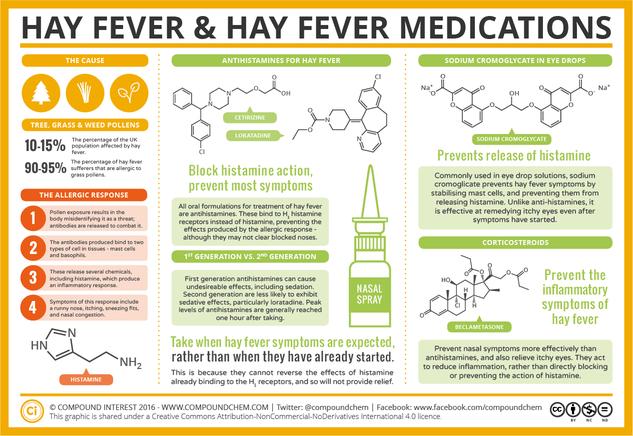 The Chemistry of Hay Fever

With the arrival of summer comes a rather less welcome arrival – allergic rhinitis, more commonly known as hay fever. Despite the pollens of trees, grasses and weeds being the origin of hay fever, it’s a chemical produced in our bodies that’s actually to blame for the symptoms – and we’ve got the chemicals in medications for hay fever to thank for relief from these symptoms.

The course of events that leads to hay fever’s symptoms begins with exposure to pollens, which the body in affected individuals mistakenly identifies as a threat. To combat this threat, the body triggers the release of the Immunoglobulin E antibody (IgE). This antibody attaches to mast cells and basophils particularly in exposed sites such as the skin.

Further pollen exposure causes the molecules in the pollen to bind to this antibodies on the outside of the mast cells, which then causes the mast cells to release a number of chemicals, including histamine. Histamine is the chemical responsible for the inflammatory response to allergens, the symptoms of which can include a runny nose, itching, sneezing and congestion.