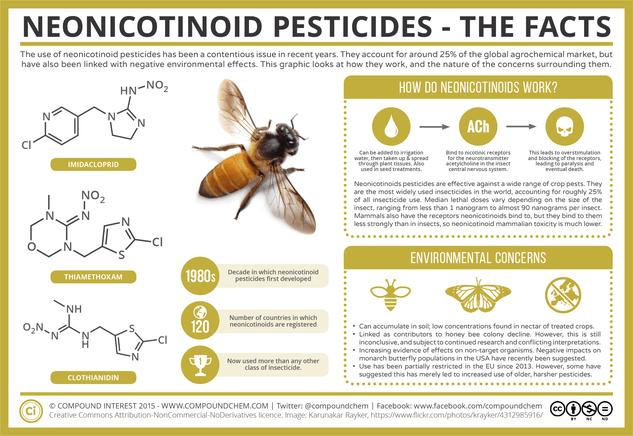 Neonicotinoid pesticides have, not for the first time, been hitting the news over the past few weeks. The commonly used chemicals help keep pests from decimating crops, but have been linked with negative effects on other organisms, in particular bee colonies. This graphic and article take a look at what we know about the neonicotinoids, and the evidence for their suggested impacts.

Neonicotinoids are actually relative newcomers on the pesticides scene. Their development began in the 1980s, but they only became widely used in the 1990s. The name ‘neonicotinoids’ stems from their similarity in terms of chemical structure to nicotine, the well-known stimulant used in cigarettes; they are a family of compounds, with the three most commonly used being Imidacloprid, Thiamethoxam, and Clothianidin. There are also another four of the compounds currently on the agrochemical market: Acetamiprid, Thiacloprid, Dinotefuran, and Nitenpyram.