How Do Tanning Lotions Work?

The Chemistry of Fake Tan 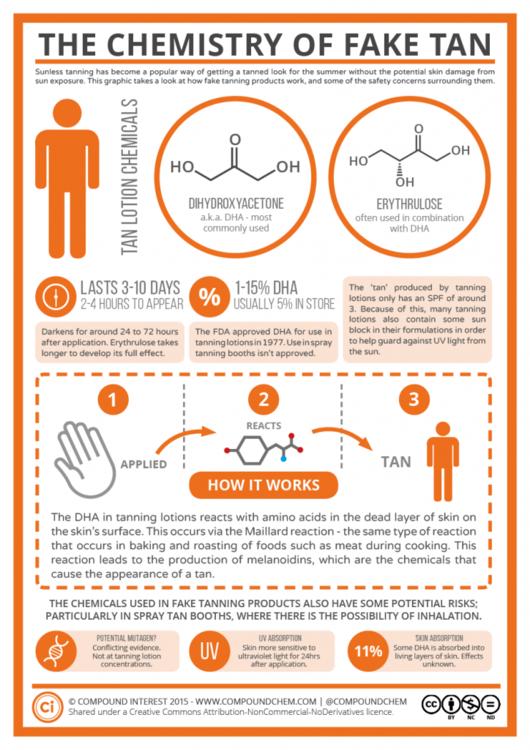 How Do Tanning Lotions Work?

We’re all well versed in the dangers of spending too much time in the sun. A golden tan after a few weeks away in the sun is everyone’s aspiration, but no-one wants to come back from a holiday red as a cooked lobster, hence the need for sunscreen (which we looked at in a previous post). However, if you’re unlucky enough not to have the time for a couple of weeks on the beach, you might be tempted to resort to tanning lotions to achieve a tanned look. These can induce the appearance of a tan, through the action of the chemicals they contain.

The main chemical used in tanning lotions is dihydroxyacetone, commonly abbreviated to DHA. Tanning lotions can contain up to 15% DHA, though the lotions available to buy in shops max out at 5%, and are usually in the 3-5% range. Obviously, the higher the percentage, the more pronounced the tanning action, though higher percentages tend to be more susceptible to streakiness after application. Another chemical, erythrulose, can also be used, though as its tanning effect is more gradual, it’s more commonly used in conjunction with DHA (if at all).