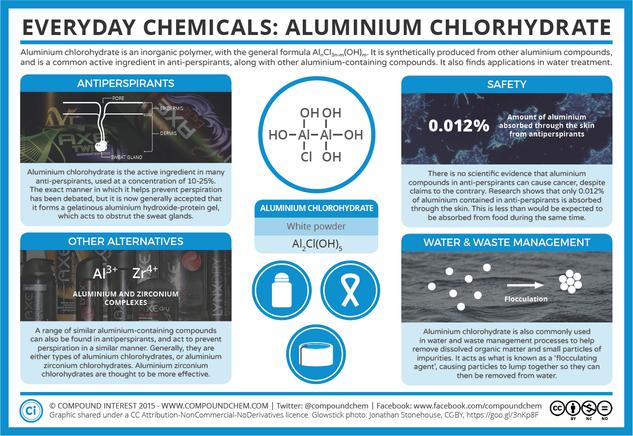 The second in the ‘Everyday Compounds’ series looks at a chemical that the majority of us probably have sitting somewhere in our home. Aluminium chlorohydrate is the active ingredient in many antiperspirants, so how does it work – and why does a casual google search for it bring up a plethora of links with breast cancer?

Aluminium chlorohydrate (and other aluminium-based compounds that are sometimes employed instead) work as antiperspirants by temporarily ‘plugging’ sweat ducts, preventing the passage of sweat to the skin’s surface. The exact mechanism by which this occurs has been debated, but it’s generally agreed to be because the aluminium chlorohydrate can form a polymeric aluminium hydroxide-protein ‘plug’, which physically partially blocks perspiration from escaping the sweat glands. This plug slowly breaks down, which is why the effect of anti-perspirants isn’t permanent, and they have to be reapplied.