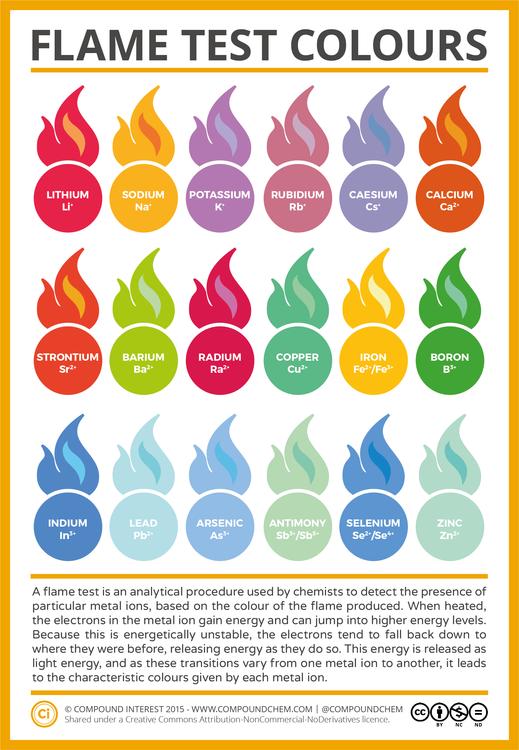 This graphic looks at the colour of various metal and metalloid ions that occur during flame tests. Most people probably remember doing this experiment in school chemistry lessons, if not with the full range of ions shown here, but for the uninitiated a brief explanation of the origin of the colours follows.

Flame tests are utilised in chemistry to identify the metal ions in compounds. They are more useful for some metals than others; particularly for the Group 1 metals, they provide a good way of quickly identifying the metal ion present.

To carry out the flame tests, a small amount of the compound being tested will be held in a flame and the colour given off observed. This colour originates from the movement of electrons in the metal ion. When heated, the electrons gain energy, and are ‘excited’ into higher energy levels; however, the electrons occupying these levels is more energetically unstable, and they tend to fall back down to their original energy levels, releasing energy as they do so. This energy is released as light, with the characteristic flame colours of different metal ions due to varying electron transitions.

As stated, these tests work better for some metal ions than other; in particular, those ions shown on the bottom row of the infographic are generally quite faint and hard to distinguish. Sodium’s flame colour is also very strong, and can easily mask the colours of other metal ions.