2020 Results: ALTANA’s sales down only slightly 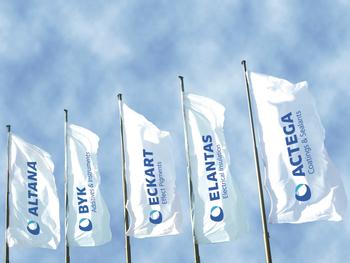 Despite the burdens of the coronavirus pandemic, the specialty chemicals group ALTANA recorded only a slight decline in sales in the 2020 fiscal year and was able to increase EBITDA in a year to year comparison. Sales reached 2,178 million euros, just 3 percent below the 2019 level. Adjusted for acquisition and exchange-rate effects, the sales decrease was 4 percent. Earnings before interest, taxes, depreciation and amortization (EBITDA) rose to 426 million euros, exceeding the previous year’s level by 2 percent. Favorable raw material costs, active cost management, and pandemic-related one-time effects including savings due to the absence of travel and trade shows contributed to this development.
At 19.6 percent, the EBITDA margin was at the upper end of the long-term target range of 18 to 20 percent, despite continued high spending in key areas such as research and development and digitalization.

“Our top priority in the 2020 fiscal year was to protect our more than 6,500 colleagues worldwide. On this basis, we once again succeeded in demonstrating ALTANA’s characteristic customer proximity in spite of physical distance,” said Martin Babilas, CEO of ALTANA AG. “The business results also show how deeply ALTANA’s innovative solutions are anchored in the lives of many people.” While demand in some segments, for example in the automotive sector, declined significantly due to the pandemic, consumer-oriented and sustainable solutions on the part of ALTANA increased in importance.

Divisions: ACTEGA on growth course due to acquisition and higher demand

Sales of the largest division, BYK, declined by 3 percent to 1,009 million euros. Adjusted for currency and acquisition effects, sales were 4 percent below the previous year’s level. Following a significant decline in sales volume as a result of the lockdown in the second quarter, sales recovered rapidly, particularly in the field of paint and coating additives. This development was driven, among other things, by strong demand in the DIY sector.

The effect pigments specialist ECKART achieved sales of 315 million euros, corresponding to a decline of 11 percent. The main reason was the pandemic-related weak demand in the automotive sector as well as other industries, such as the cosmetics sector. The discontinuation of the white pigments trading business in China in mid-2019 also contributed to this development. The acquisition of the business of TLS Technik GmbH & Co. Spezialpulver KG to expand the ECKART portfolio in industrial, metal-based 3D printing will not be included in earnings until 2021.

ELANTAS, the supplier of electrical insulation materials, recorded sales of 463 million euros, 6 percent below the 2019 figure (5 percent in operating terms). The positive acquisition effects could not offset the pandemic-related decrease in demand and negative exchange-rate effects.

ACTEGA achieved significant growth in the 2020 fiscal year compared to 2019, increasing its sales by 9 percent to 391 million euros. Even adjusted for the acquisition of the Swiss Schmid Rhyner AG and negative exchange-rate effects, ACTEGA posted operating growth of 3 percent, significantly above the previous year's level. The division particularly benefitted from a shift in consumer behavior toward even more sustainable solutions, including PVC-free sealants for food packaging.

The ALTANA Group’s sales continue to be evenly distributed worldwide, though there were regional differences in the 2020 fiscal year. Europe, which continues to be the Group’s strongest sales region, achieved sales of 842 million euros and remained stable overall with a slight decline of 2 percent. Adjusted for positive acquisition effects, the sales decrease was 5 percent. Sales in the Americas fell by 6 percent to 586 million euros. Adjusted for acquisition and exchange-rate effects, the sales drop was 5 percent. Sales in Asia reached 712 million euros, only 3 percent down on the previous year’s figure in both nominal and operating terms due to the rapid and sustained recovery in China.

ALTANA continued to invest expressly in innovation in 2020, including in the future market of digital printing. For example, ALTANA's internal startup ACTEGA Metal Print succeeded in deploying a novel technology to enable decorative metallic effects with considerably less material, costs, and production time than with previously common processes. The first beta customers and a sales partner were acquired for this purpose. Overall, research and development expenditure in the ALTANA Group remained at a high level, 163 million euros, accounting for about 8 percent of sales.

At the same time, ALTANA continues to drive forward digitalization. Following BYK and ACTEGA in the previous year, ECKART’s e-commerce platform went online in 2020. In all, ALTANA invested around 10 million euros in digitalization projects in the past fiscal year.

In addition, ALTANA is on track to achieve climate neutrality in its direct sphere of influence by 2025. Already in March 2020, the Group switched its entire electricity procurement worldwide to renewable energies, thereby reducing its carbon footprint by around 50 percent. In the summer, the independent rating company EcoVadis awarded the ALTANA Group gold status for its commitment to sustainability for the second time.

ALTANA expects the coronavirus pandemic to be further contained in the current year and the global economy to recover as a result. In this environment, the company forecasts operating sales growth in the low to mid single-digit percentage range with a lower EBITDA margin compared to 2020. Acquisitions will lead to additional sales growth.