Bayer: Early indications of a successful start to 2021

Stable operational development in fiscal 2020 despite the COVID-19 pandemic 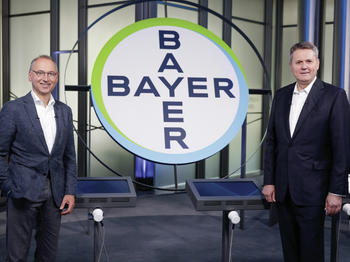 Prof. Dr. Norbert Winkeljohann (right), Chairman of the Supervisory Board, and Werner Baumann, Chairman of the Board of Management of Bayer AG, greet each other before the start of the 2021 online Annual Stockholders’ Meeting.

In 2020 the Bayer Group weathered the COVID-19 pandemic well from an operational point of view. “That shows very clearly that we are active in the right industries. After all, few things are more important to people than health and nutrition,” said Werner Baumann, Chairman of the Board of Management, at the company’s Annual Stockholders’ Meeting on Tuesday. “And that’s where we can make a decisive contribution. We’re optimistic for the future.”

According to Baumann, the company’s responsibility in the pandemic is first and foremost toward its customers and toward ensuring the safety and health of its employees throughout the world. He said Bayer has shown once again that what it does with respect to health and nutrition puts it at the center of society. And that it is able to provide practical help to hospitals, aid organizations, local and government authorities, thanks partly to the protective measures adopted at all sites. “They have relied on our support – and we were able to justify their trust,” said Bayer’s CEO. “In that way we’ve succeeded in keeping our promise to customers even under historically difficult circumstances. We’ve been able to avoid supply disruptions caused by the pandemic. And we’ve continued to provide what are in some cases life-saving products to patients, farmers and consumers. That’s something we’re very proud of.” He expressed his gratitude on behalf of the entire Board of Management “for the tremendous dedication our global teams have shown in responding to the pandemic. They’ve been working under exceptional circumstances in both their professional and their private lives for more than a year.” Along with Supervisory Board Chairman Prof. Dr. Norbert Winkeljohann and Vice Chairman Oliver Zühlke, all the members of Bayer’s Board of Management personally attended the otherwise virtual Annual Stockholders’ Meeting in Leverkusen – including, for the first time, Sarena Lin, who was appointed to the Board of Management in February 2021 as Chief Transformation and Talent Officer.

Baumann admitted that trust had been lost during 2020 because the original targets were not met and the performance of the stock was disappointing. “Let me say quite clearly: we can’t be satisfied with that. We didn’t meet your expectations last year, and we didn’t meet ours either,” the CEO said in his address to the stockholders. “Irrespective of which factors were under our control and which were not: we bear the responsibility – with no ifs or buts.”

Group sales in 2020 totaled 41.4 billion euros and thus grew by 0.6 percent after adjusting for currency and portfolio effects. EBITDA before special items, at 11.5 billion euros, and core earnings per share from continuing operations, at 6.39 euros, also remained stable despite sharply negative currency effects. However, Bayer had massive extraordinary charges to contend with, leading to a net loss for the Group of 10.5 billion euros despite the stable operational development.

The special charges mainly related to the litigations in the United States and impairment losses recognized at Crop Science. Last year Bayer announced settlements totaling about 12 billion U.S. dollars for the principal product liability claims pending in the United States. The greater part of this amount – up to 9.6 billion dollars – relates to the existing glyphosate lawsuits. The company has since settled by far the majority of these claims. A new proposal for the management of future cases agreed upon with and supported by plaintiffs’ counsel has been submitted to the responsible judge in California for a decision. For the revised proposal, both parties worked diligently to address the points mentioned by the court.

Despite the extraordinary charges, Bayer is maintaining its dividend policy of distributing between 30 and 40 percent of core earnings per share. The Board of Management and Supervisory Board have proposed to the Annual Stockholders’ Meeting that a dividend of 2.00 euros per share entitled to the dividend be paid for fiscal 2020.

Referring to the outlook presented at the end of February, Baumann said 2021 would still be a transition year. But early indications were “that we had a successful start to the year. In the agriculture business, in particular, we see a market environment that gives us an increasingly positive perspective.” The CEO assured the stockholders: “We want to regain your trust. We’re working hard to do that. And we will deliver.”

Baumann emphasized that all three of Bayer’s divisions are set to grow and increase their earning power, reconfirming the mid-term targets presented by the Board of Management at the Capital Markets Day in March. He said that in the area of agriculture, no company worldwide puts more money into research and development than Bayer. Last year alone, the company commercialized ten new crop protection formulations and developed three important biotechnology products to market-readiness. The leading digital farming platform Climate FieldView™ is now being used on over 60 million hectares of land worldwide. In the seeds area, farmers across the world were offered more than 430 new varieties of corn, soybeans, cotton and vegetables.

In Pharmaceuticals, too, the course is set for future growth. Here Bayer is counting especially on several products with blockbuster potential – which means possible peak annual sales of at least one billion euros each. The cancer drug Nubeqa™ and the heart failure medicine Verquvo™ have already seen their first market launches. This year it is also planned to launch finerenone to treat diabetic kidney disease and embark on the Phase III clinical trial with elinzanetant to treat symptoms of the menopause. In addition, Bayer last year acquired the U.S. biotech company AskBio, greatly strengthening its position in the highly promising area of cell and gene therapy. The company is also pursuing completely new therapeutic approaches to diseases such as Parkinson’s, a neurodegenerative disorder that has so far proven incurable.

At Consumer Health, too, Bayer invested in new technologies. For example, the company strengthened its position in the promising market for nutritional supplements with the acquisition of the U.S. company Care/of.

On top of this comes the involvement of the “Leaps” unit, through which Bayer deliberately invests in groundbreaking future technologies.

Baumann added that there is every reason for optimism about combating the pandemic. He said people now understand better than ever before that scientific progress and innovations are the key to a better life. “Not far from here – at our site in Wuppertal – our colleagues are now working with great commitment to set up a production for CureVac’s mRNA vaccine,” he continued. Bayer intends to supply the first quantities of the CureVac vaccine from its own production at the end of this year. Next year, the company aims to manufacture 160 million doses of this vaccine. In addition, it is actively supporting CureVac in developing and supplying the vaccine, which will hopefully be approved for use in the European Union within a few weeks. Baumann said that only systematic vaccination will end the pandemic and protect people from what can be serious and lasting health damage caused by the disease. “We are all very proud that Bayer employees are able to make a decisive contribution to this effort.”

The CEO cited the COVID-19 vaccine as a perfect example of the advances that can be made toward solving the major problems of our time through new technologies and global cooperation. “But of course there are also other pressing issues that need to be resolved through science: How can we ensure the food supply for more and more people in times of climate change? How can we ensure health care for more and more elderly people?” Baumann said that finding answers to these questions is what underpins “Bayer's attractive long-term growth prospects. We’re working on it the way our company has always done – with an untiring focus on innovation.”

He said humanity is at the beginning of an era of technological change like at the end of the 19th and the beginning of the 20th century. “And today, radical technological change is taking place once more. It’s happening in the world of genes and proteins.” Baumann said this is a world in which the boundaries between biology on the one hand, and data analysis and artificial intelligence on the other, are steadily merging – with experts calling this the bio-revolution. “The work being done in this field in research laboratories worldwide has the potential to give us a fundamentally new understanding of health and nutrition: to show that many diseases can not only be treated, but also cured; that plants can be engineered to fertilize themselves; that sustainable agriculture is possible while saving resources at the same time. Bayer is better positioned than almost any other company to realize this long-term innovation potential,” he explained, with the special opportunity lying in the fact “that foundational technologies such as gene editing and microbiome research will give rise to innovations in all of our businesses. We will drive Bayer’s development forward at full power, with our goals firmly in view.”

Supervisory Board: key areas of work

Prof. Dr. Norbert Winkeljohann is chairing the Annual Stockholders' Meeting for the first time. He has been a member of Bayer’s Supervisory Board for three years and its Chairman for one year. In his address to the stockholders, Winkeljohann said he is convinced of the company’s potential. “Bayer’s vision – Health for all, hunger for none – very much appeals to me personally. It is a vision worth pursuing.” Winkeljohann said that over the next twelve months the Supervisory Board will focus mainly on increasing value through the accelerated implementation of Bayer’s strategy, supporting change processes, strengthening growth and resolving the glyphosate litigations. The Supervisory Board will also pay attention to discipline in capital allocation and debt reduction, to targeted innovation and digitalization, and to the company’s sustainability goals. “Bayer holds strong positions in attractive markets with significant potential for growth and value creation. In my role as Chairman of the Supervisory Board, I will do my part to ensure that Bayer consistently takes advantage of these opportunities,” Winkeljohann said.

The Annual Stockholders' Meeting will also elect two new stockholder representatives to the Supervisory Board. Two independent candidates are proposed for election, each to serve for a term of four years: Prof. Dr. Fei-Fei Li (44), a leading expert in artificial intelligence and Professor in the Computer Science Department at Stanford University in California, and Alberto Weisser (65), a renowned agricultural expert with decades of capital market experience in the United States. Li and Weisser are intended to succeed Johanna W. (Hanneke) Faber (52) and Prof. Dr. Wolfgang Plischke (69). Both these members’ terms of office expire at the end of this year’s Annual Stockholders' Meeting, and neither of them is standing for re-election. Bayer’s stockholders will also vote on an adjustment to Supervisory Board compensation.