The Chemistry of Glow Sticks 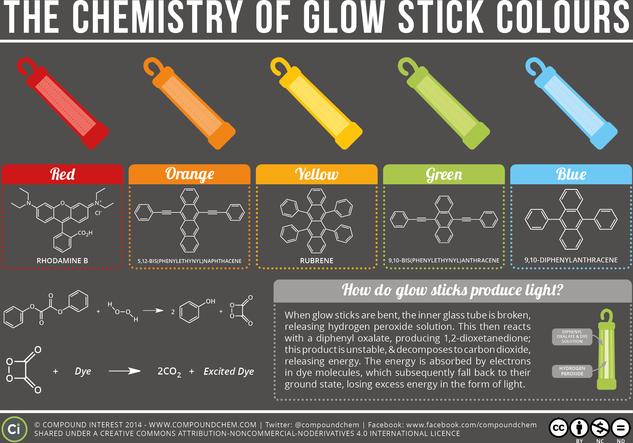 The Chemistry of Glow Sticks

Everyone’s familiar with glow sticks, but it’s likely that fewer are familiar with the chemistry behind their glow. You may have wondered what happens when you snap a glow stick to activate it; by doing this, you’re actually kicking off a chemical process that eventually leads to the production of the coloured light. But how does this process work, and why do you need to bend the glow stick to initiate it?

Glow sticks actually contain two separate compartments, with two different chemical solutions. One solution, in the case of most glow sticks, contains a diphenyl oxalate compound, along with a dye whose identity varies depending on the desired colour. The other solution is one of hydrogen peroxide, a chemical recently featured in the ‘Everyday Compounds’ series, and is contained within an inner glass cylinder. This cylinder keeps the two solutions separate from each other, and prevents them from reacting. The action of snapping the glow stick breaks the glass cylinder, allowing the two solutions to mix and kicking of the reaction leading to the glow.