The Chemistry of Petrol & The Tetraethyl Lead Story 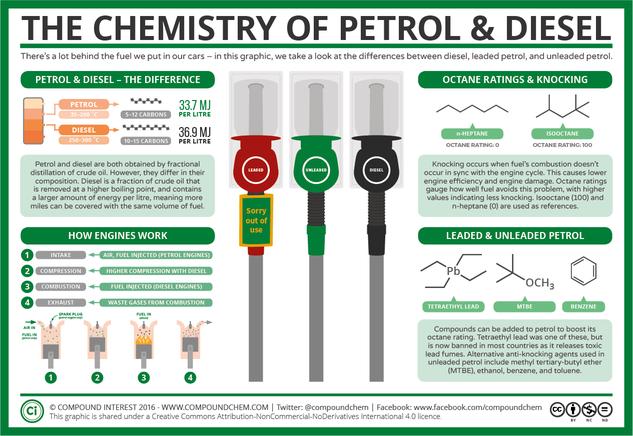 The Chemistry of Petrol & The Tetraethyl Lead Story

18th May marks the date of birth of Thomas Midgley, who made significant contributions to something many of us make use of on a regular basis: petrol. Midgley was the research assistant to Charles Kettering, and the duo were responsible for the addition of the compound tetraethyl lead to petrol, an innovation that would have a lasting legacy – although perhaps not in the manner that they may have originally envisioned.

Some general background information on petrol (gasoline for our US readers) is probably necessary before we discuss the finer points of Kettering and Midgley’s contributions. Petrol is obtained from crude oil, as is diesel. The two do differ slightly in their composition and properties however. They are obtained from crude oil by fractional distillation, where the oil is heated until it boils and vaporises, then fractions at different boiling point ranges are distilled off. Petrol is formed from fractions that have a boiling point between 35 to 200 degrees celsius, whereas the fractions that form diesel have a boiling point between 250 to 300 degrees celsius.

Both petrol and diesel are composed of mixes of hydrocarbons – compounds, unsurprisingly, containing carbon and hydrogen only. Petrol contains hydrocarbons with chains between five to twelve carbon atoms long, with diesel’s chains being slightly longer at ten to fifteen atoms. Diesel also contains more energy than petrol per litre, making it a more efficient fuel, albeit a more expensive one.