The Chemistry of Gunpowder 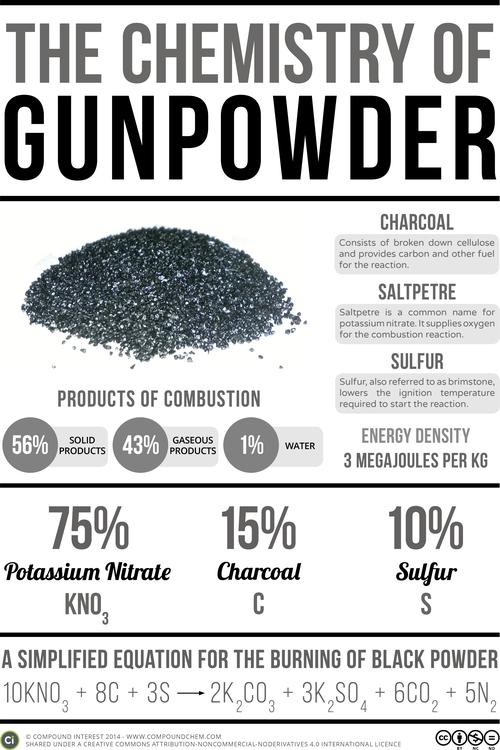 The Chemistry of Gunpowder

With the Fourth of July and American Independence Day on the horizon, a somehow topical post seemed in order. Having already examined the chemical compounds that give fireworks their colours in a previous graphic, I decided to examine another important firework component here: the first chemical explosive, gunpowder, also commonly referred to as black powder.

Until the mid-19th Century, gunpowder was the only known chemical explosive. Its use can be traced much earlier than this, however, and there are historical accounts of its use in fireworks in China as far back as 1200AD. In subsequent centuries it had military applications in rifles and cannons, but in these it has long since been replaced by modern, smokeless powders. The fireworks industry is one of the last major industries that still uses traditional black powder.

Rather than being one particular compound, gunpowder is actually a mix of three different components. It consists of potassium nitrate (75% by weight), charcoal (15% by weight), and sulfur (10% by weight). Each of these components plays an important role in the combustion of gunpowder.