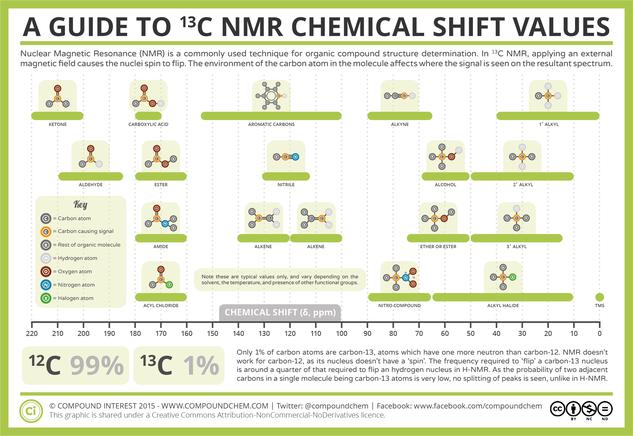 In previous entries in the Analytical Chemistry series of graphics, we’ve looked at some of the tools that chemists can use to determine the identity of compounds in various samples, including infrared spectroscopy and hydrogen nuclear magnetic resonance (NMR). Today looks another similar method, that of carbon NMR; the graphic provides some general information on interpreting the resultant spectra, whilst we’ll briefly discuss how these signals are created below.

As mentioned, we’ve already discussed nuclear magnetic resonance, or NMR, in a previous post where hydrogen NMR was examined. That post also provides a more thorough overview of how the signals are generated, and the method for carbon-13 NMR is exactly the same – it’s just carbon atoms that are involved, instead of hydrogen atoms.

Like hydrogen atoms, some carbon atoms can have a property called ‘spin’. Spin is a rather abstract concept, but at a simplified level, nuclei that possess this property can be thought of as acting like very small magnets. These magnets, when place in a magnetic field, can align either with or against the field, and this is the basis of NMR. You’ll not I mentioned some carbon atoms, not all. This is because not all carbon atoms have spin; in fact, only carbon-13 atoms do.