The Chemistry of Whisky 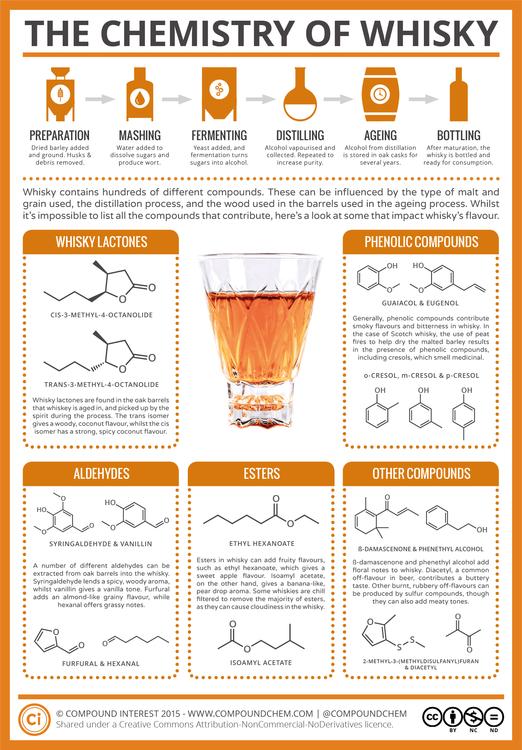 The Chemistry of Whisky

Whisky is one of the world’s most popular spirits, and comes in many different classes and types. The character and flavour of these differing types vary widely; this, of course, comes down to their varying chemical composition. Here, we take a look at where some of these different compounds come from, and what they contribute.

Making whisky is, to an extent, a relatively simple process (albeit a long one). It starts with barley, which is soaked in water and then dried. The manner in which this drying is accomplished can affect the chemical composition of the finished whisky, and in the case of Scottish whiskies, was traditionally carried out using peat fires. The barley is then milled, then added to water. Mashing breaks down the starch in the barley into sugars, producing a sugary liquid called wort which can be used in the next stage of the process.

This is where fermentation comes in. Yeast is added to the wort, which turns the sugars into alcohol; the exact yeast used can also have an effect on the final taste. After fermentation, the alcohol percentage of the wort is between 5-10%. Up to this point, the process has differed little from that which produces beers, but here is where it deviates.