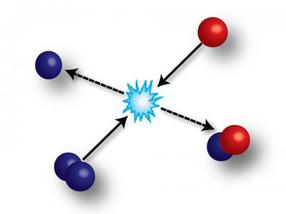 When a molecule (two blue spheres) collides with an atom (single red sphere), an atom can be exchanged. A new molecule is produced (red and blue spheres) and an atom (single blue sphere) is released. In the experiment performed in Innsbruck this process is observed at temperatures of less than one millionth above the absolute zero. The exchange is completely determined by the quantum nature of the matter and can be controlled by a magnetic field.

Complex processes, which to a large extent cannot be observed directly, determine when chemical reactions build molecules or conversely release molecular bonds. Some of these processes need energy (endoergic processes) and others release energy (exoergic processes). For the first time, great progresses made in the field of ultracold atomic and molecular gases have facilitated the realization of elementary chemical processes in a fully controlled way, where all particles can be prepared in a specifically defined quantum state. In an international first, together with American researchers, Rudolf Grimm and his team of physicists have now succeeded in directly observing and also energetically controlling an exchange process in a quantum gas. "Our experiment showed that it is possible to control exchange processes involving ultracold molecules", Grimm says excitedly.

The scientists optically trap cesium atoms and cool them dramatically. A Feshbach association results in an ultracold particle cloud consisting of about 4,000 molecules and 30,000 atoms, where a part of the atoms are arranged in dimers. By applying a microwave pulse, the atoms are transferred into another quantum state without the molecules being modified. After preparing this mixture of molecules (A+A) and atoms (B), the experimental physicists apply a certain magnetic field, which allows them to fully control the binding energy of the molecules. The collision of the molecules and atoms results in an exchange process when a certain threshold of binding energy is reached. The original molecules decay to atoms (A) and new molecules are produced (A+B). "Since the energy produced in this exoergic process is very low, the reaction products remain in the trap," explains Rudolf Grimm. "Thus, we were able to directly observe the chemical process for the first time ever."

Leading in the field of quantum gases

The research group led by Wittgenstein awardee Rudolf Grimm of the Institute for Experimental Physics of the University of Innsbruck and the Institute for Quantum Optics and Quantum Information (IQOQI) of the Austrian Academy of Sciences (ÖAW) assumes a leading role in the research on ultracold quantum gases. For example, in 2002 the physicists produced the first Bose-Einstein condensate of cesium atoms. This success was followed by the realization of a first Bose-Einstein condensate of molecules and a Fermi condensate. The quantum physicists are now able to produce more complex molecules in ultracold quantum gases. "A totally new field of research opens up, which promises possibilities to study diverse chemical reactions in a controlled way by using ultracold quantum gases," explains Grimm.