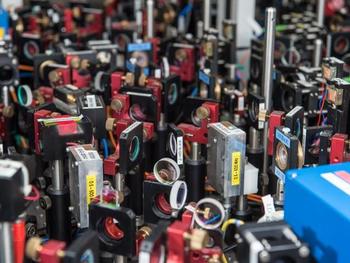 Detail of the experimental setup used by Hubry et al. to study metastability and avalanche dynamics in a quantum many-body system.

Be it snow on a slope that can sit there for days before being sent descending by an overambitious skier or bonds in macromolecules that change dramatically upon appropriate activation -- systems that reside for extended periods of times in one state before switching rapidly to another, energetically more favourable one are found in many different contexts. Several aspects of metastability are well understood, but in particular studying the switching dynamics from one state to another remains a challenge, as few tools are available to directly monitor such processes.

Lorenz Hruby and his colleagues in the group of Tilman Esslinger at the Institute for Quantum Electronics have tackled the problem at a very fundamental level, as they report in a paper. They created metastable states in an artificial quantum many-body system, an atomic gas whose fundamental quantum properties are precisely known and whose behaviour they can control with high accuracy and flexibility. In this system Hruby et al. observed two metastable states characterised by different ways how the atoms are ordered (reminiscent of distinct structures that macromolecules can adopt). Importantly, they successfully monitored in real time how the gas switched between these two states. They found that during the switching process several thousand atoms move through quantum tunnelling on the timescale on which typically single particles change their position.

As the trigger for that 'tunnelling avalanche' the team identified processes on the surface of the atomic gas. Comparing the experimental observations with a theoretical model, they determined that the switching timescale is set by interactions between the atoms themselves, rather by external control parameters. Central for that process to happen was the ability -- pioneered by Esslinger's group in earlier work -- to let the atoms interact simultaneously over both short (atom-atom) and long distances, as to let the particles engage in the sort of intricate interplay that gives rise to intriguing properties in a broad variety of materials and, at the same time, to couple the surface of the system to its core.

The study of Hruby and co-workers provides fundamental insights into metastable states of matter and into the processes to switch between these states. The high degree of control demonstrated in these experiments, together with the possibility to directly compare experimental results with theoretical models, promises that such experiments should provide a versatile platform for studying the dynamics of metastable states and related processes in unprecedented detail.