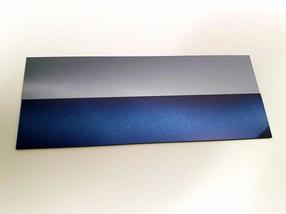 A silicon wafer without (top) and with (bottom) nano-cellulose coating. Each wafer is two centimetres wide and ten centimetres long. 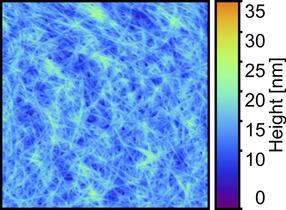 Measurements with an atomic force microscope show the nanopaper to be extremely smooth, varying only nanometres in height.

With a new spray coating process, very uniform layers of cellulose nanofibers (CNF) can be produced on an industrial scale. X-ray investigations at DESY's research light source PETRA III as well as investigations with an atomic force microscope and neutron scattering show how the layer is structured and can be tailored for different purposes like extremely thin, smooth and tough nanopaper. A Swedish-German research team led by DESY scientist Stephan Roth presents its structural analyses in the journal Macromolecules.

“Porous, nanostructured cellulose films have a number of advantageous properties that make them interesting for various applications from ultrastrong bio-active fibres to transparent conductive nanopaper,” explains the main author of the study, Calvin Brett from DESY and the Royal Institute of Technology (KTH) in Stockholm. “They are lightweight and temperature stable, have excellent mechanical properties, a low density and are made from renewable raw materials – cellulose nanofibers are usually made from wood.”

This makes cellulose films a promising alternative to mineral oil-based plastics and promising candidates for the construction of functional materials such as bio-composites or biologically inspired sensors. For example, functional polymers or other substances can be introduced into the pores of the cellulose film in order to produce certain functions.

In the process developed at KTH Stockholm and DESY, cellulose nanofibers with an average length of 500 nanometers (millionths of a millimeter) and a typical thickness of 3 to 5 nanometers are sprayed onto a silicon substrate in a water-containing carrier liquid. The substrate is heated to 120 degrees Celsius in order to evaporate most of the water quickly and thus stabilize the cellulose layer. The result is an extremely light, only 200 nanometers thin cellulose layer – a kind of ultra-thin and extremely smooth paper. “A key question for the right properties is the relationship between the layering of the individual nanofibers, the porosity and the nanostructure within the cellulose film,” explains Roth, who is also a professor at KTH Stockholm.

At the P03 measuring station at PETRA III, led by Roth, the team investigated the inner structure of the cellulose films with X-rays. The analyses showed that the amount of water still bound in the finished cellulose film increases with the electrical surface charge of the sprayed nanofibers. This electrical charge can be specifically influenced during production, thus controlling the properties of the film. At the same time, investigations with the atomic force microscope showed that the roughness of the cellulose film decreases with increasing surface charge. The stronger the individual fibers are electrically charged, the smoother the film becomes.

Because water can be detected particularly sensitively by neutrons, the researchers used the small angle scattering system KWS-1 of the Forschungszentrum Jülich at the Heinz Maier-Leibnitz Zentrum (MLZ) in Garching. They investigated the consequences of wetting and drying the material and analysed the cavities in the film into which functional substances such as polymers or metals can be introduced. The neutron measurements were carried out jointly by the instrument scientist Henrich Frielinghaus and the scientists from Peter Müller-Buschbaum's Chair of Functional Materials at the Technical University of Munich. "With our data, we can now tailor cellulose films for specific applications, which for example have the optimum ratio between roughness, water content and voids," says Roth. "Neutron scattering experiments show their full potential here," emphasises Müller-Buschbaum, scientific director of the neutron source FRMII in Garching.

Such coatings can now be produced not only on a laboratory, but also on an industrial scale, emphasises Brett: “We have scaled up the process to such an extent that it is now possible for the first time to apply a cellulose film with only two nanometers of roughness to a 50-meter-long film.” In the next step, the researchers plan to incorporate functional polymers into the cellulose film in order to produce a sensor material, for instance.