First trade fair in the analytica network in Africa 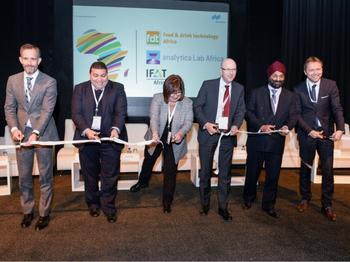 The first analytica Lab Africa took place from July 09 to 11, 2019, at the Gallagher Convention Center in Johannesburg: 148 exhibitors from 15 countries presented their tailor-made solutions from laboratory technology, analysis, biotechnology and diagnostics for the African market. analytica Lab Africa also was a success in terms of visitor numbers: 3,232 trade fair visitors attended the event.

Dr. Reinhard Pfeiffer, Deputy CEO of Messe München, sums it up: “The past three days have shown that there is a high market demand for the technology and know-how we bring together at analytica Lab Africa. Exhibitor and visitor expectations were exceeded. The Exhibitors noted the high quality of visitors to their stands, especially from market end-users.”

After the acquisition of what was then Lab Africa by Messe München in 2017, the trade fair was integrated into analytica’s international network, which, in addition to the world’s leading trade fair in Munich, comprises regional leading trade fairs in China, India and Vietnam. Claudia Sixl, Exhibition Group Director analytica on the first edition of the show under the roof of Messe München: “The products and solutions we bring together at analytica Lab Africa are essential for the growth market of Southern Africa. This makes the trade fair an indispensable market platform even now.”

Nikolai von Knauer, General Manager, of Sartorius, South Africa is enthusiastic about how the event benefits from the analytica network. He says: “analytica Lab Africa is reaching European standards of excellence. We have seen more customers than expected and the quality of visitors has been very good.”

Shimadzu MS Product Specialist, Charl Yeates (Ph.D.) said that the colocation was beneficial, resulting in 20 percent of new business leads generated from the collocated shows. Yeates added that Shimadzu received additional interest from other international exhibitors on the expo floor.

The supporting program included a forum and demo area with practical presentations on food safety, laboratory applications and other topics.

One if the highlights included the live demonstrations about laboratory safety and risks in the laboratory.

Sascha Kunkel, Vice President of Global Markets with German lab storage specialists asecos, who presented the lab safety workshops said: “Lab safety starts with awareness, and only once we are aware of the possible dangers, can we take the appropriate measures to mitigate the risks.” Kunkel added that the workshops were interactive and very well attended by the industry.

148 exhibitors from 15 countries presented at analytica Lab Africa, among them market leaders such as Merck, Metrohm, Shimadzu, Sartorius, and Thermo Fisher. In addition, some 90 international companies were represented at the trade fair via local distributors—likewise including well-known industry giants such as Honeywell, Mettler Toledo, Miele, and Olympus. Particularly pleasing was the high number of international participation among the exhibitors, which reached as far as India. Joint booths from Germany, China and Spain as well as an international joint booth completed the international participation.

In addition to analytica Lab Africa, two other Messe München events were hosted simultaneously in Johannesburg: food & drink technology Africa (fdt Africa) and IFAT Africa. Thanks to the three events, exhibitors and visitors benefited from the co-location.

Suzette Scheepers, CEO of Messe Muenchen South Africa, explained: “The joint platform of the leading industry events made it possible to get extensive and comprehensive information on trends and innovations from the environmental, beverage and food industries, as well as from laboratory and analysis technology.”

Together, the events occupied 17,000 square meters in four halls of the Gallagher Convention Centre. In total, 379 exhibitors presented their solutions and products to 8,324 visitors. In addition to the 148 exhibitors at analytica Lab Africa, these were 65 exhibitors at food & drink technology Africa and 166 at IFAT Africa.

The successful concept will be continued in 2021, from 13–15 July, at the Gallagher Convention Centre in Johannesburg.