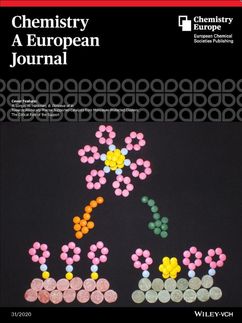 The University of Jyväskylä

The research made to the cover of Chemistry-A European Journal in June 2020. In the image: gold clusters (yellow gems) protected by organic molecules (pink and blue gems) split in two different ways based on the support that it is deposited on. In the case shown to the left, the gold cluster breaks down completely into monoatomic species, while in the case shown to the right, the organic molecules move away leaving behind the intact gold cluster ready for catalysis.

In collaboration with experimentalists from Ghent University, Belgium and Utrecht University, Netherlands, researchers at the Nanoscience Center (NSC) at the University of Jyväskylä, have recently discovered that the choice of a support material for model catalysts, made from gold nanoclusters protected by organic molecules, may have drastic effects on the structure of the catalyst. On certain supports, the clusters completely disintegrate, while on others, the organic protective layer peels away leaving behind the intact metallic nanoclusters that can act as catalysts for a desired reaction.

Catalysts are important to produce chemicals used in our daily lives. They save a lot of energy and make chemical reactions faster as compared to their uncatalysed counterparts.

Nanomaterials, especially metallic nanoclusters are widely used owing to their high efficiency and are generally placed on an inactive oxide support for these applications. However, these nanoclusters are at times less stable, and are protected hence with a layer of organic molecules. The present study is an important step towards the design, control, and synthesis of atomically precise supported catalysts with tailored physical and chemical properties.

The theoretical models developed in Jyväskylä explained the experimental observations by studying the charge transfer between the support and the clusters.