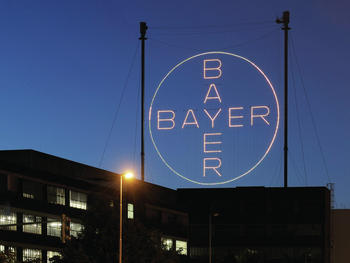 Bayer has confirmed its targets for full-year 2020 following a challenging third quarter due to seasonal factors. “Despite the weak quarter and the substantial impact of the pandemic, our currency- and portfolio-adjusted sales and core earnings per share in the first nine months of the year were level with the prior-year period thanks to stringent cost management and the acceleration of our structural measures. We can therefore confirm our currency-adjusted Group outlook for 2020,” said Werner Baumann, Chairman of the Board of Management, on Tuesday during a conference call. Summarizing the company’s business performance, Chief Financial Officer Wolfgang Nickl said: “We saw a challenging quarter in our agricultural business, a recovery in our pharmaceuticals business and strong growth at Consumer Health.” Employee safety during the pandemic remains a top priority for Bayer. The company has implemented a wide range of protective measures to ensure that it can continue to provide patients, farmers and consumers with a reliable supply of products, especially life-saving medicines.

“The impact of the pandemic is placing additional strain on our Crop Science Division. We are also facing negative currency effects, such as the massive depreciation of the Brazilian real, which is weighing heavily on business in the world’s second-largest agricultural market,” said Nickl. In view of the headwinds in the agriculture business, the company has taken non-cash impairment charges for the division, as announced on September 30.

Bayer last week announced the acquisition of Asklepios BioPharmaceuticals, marking a very important strategic step for the company. AskBio is a U.S.-headquartered biopharmaceutical company specialized in the research, development and manufacture of gene therapies across different therapeutic areas. “The acquisition significantly strengthens our position in cell and gene therapies,” Baumann said. “Bayer is better positioned than almost any other company to harness the long-term innovation potential of the bio-revolution in health and agriculture, and thus make a key contribution to solving some of the most pressing questions facing humanity: How can we feed up to 10 billion people by 2050 in a world impacted by climate change? And how can we ensure quality of life for a growing number of elderly people? Finding answers to these questions – that’s what underpins our attractive long-term growth prospects.”

Group sales in the third quarter came in at 8.506 billion euros, down 5.1 percent on a currency- and portfolio-adjusted basis (Fx & portfolio adj.). Group EBITDA before special items decreased by 21.4 percent to 1.795 billion euros. This figure included a negative currency effect of 205 million euros. EBIT came in at minus 9.399 billion euros (Q3 2019: plus 1.208 billion euros) after taking into account the non-cash impairment charges on intangible assets in the Crop Science Division, including goodwill, that amounted to 9.251 billion euros in total.

EBIT included net special charges of 10.181 billion euros (Q3 2019: 13 million euros) that pertained to the aforementioned impairment charges and provisions in connection with potential future Roundup™ litigation as part of the glyphosate litigations. Other special charges resulted from the ongoing restructuring program and litigations at Pharmaceuticals. Net income came in at minus 2.744 billion euros (Q3 2019: plus 1.036 billion euros). Core earnings per share from continuing operations fell by 30.2 percent to 0.81 euros in the third quarter but were level year on year in the first nine months at 5.07 euros.

Free cash flow declined by 2.1 percent to 1.237 billion euros in the third quarter. At 28.268 billion euros, net financial debt as of September 30, 2020, was down 21.5 percent from the end of June 2020, mainly thanks to the proceeds from the divestment of the Animal Health business unit.

Sales at Soybean Seed & Traits were level with the prior-year period (Fx & portfolio adj. plus 0.2 percent), with growth in Latin America offsetting lower volumes in North America. Sales at Fungicides advanced by 12.0 percent (Fx & portfolio adj.), with growth across all regions. In Latin America, Bayer primarily benefited from the market switching to the Fox Xpro™ product in Brazil.

EBITDA before special items at Crop Science decreased to minus 34 million euros (Q3 2019: plus 500 million euros). The decline was mainly due to the decrease in sales in North America, which was primarily attributable to the developments relating to product returns. There was also a negative currency effect of 123 million euros.

In October there was some encouraging news from the United States, with the country’s Environmental Protection Agency (EPA) announcing a new five-year registration for the dicamba-based XtendiMax™ herbicide with VaporGrip™ Technology, an important weed-control tool for many U.S. growers. The news puts an end to the uncertainty following a U.S. court decision in June that prohibited the use of dicamba.

There are approximately 88,500 claims in the litigation involving glyphosate-based Roundup™ products that are either covered by fully executed master settlement agreements (MSAs), MSAs to be executed, or agreements in principle. At the end of June, Bayer had reported that there were approximately 125,000 filed and unfiled claims. Given uncertainties about eligibility and participation, this number will not be finalized until the settlement process is completed. The company is also continuing to work on a joint proposal to address potential future Roundup™ claims together with plaintiffs’ counsel and is working in good faith to address the issues raised by the court to the satisfaction of all parties. Though progress is being made, it will take more time to complete this process. Bayer took an additional provision in the third quarter to cover the increased cost of a revised class plan, as it is far enough along in the negotiations to know that the new plan will come in at approximately 2 billion U.S. dollars, an increase over the original cost of 1.25 billion U.S. dollars. Upon completion of the formal agreement, the company will file a motion for preliminary approval.

Sales of prescription medicines (Pharmaceuticals) declined by 1.8 percent (Fx & portfolio adj.) to 4.229 billion euros. In China, the negative effects from the implementation of new tender procedures for the products Glucobay™ and Avelox™ were partly offset by strong volume increases for Glucobay™ and sales gains for other products. The modest signs of recovery from the global impact of COVID-19 which had already become apparent toward the end of the previous quarter largely continued, especially in ophthalmology and women’s health.

Sales of the oral anticoagulant Xarelto™ increased by 13.8 percent (Fx & portfolio adj.), mainly as a result of higher volumes in China, Germany and Russia. Sales of the ophthalmology drug Eylea™ advanced by 2.2 percent (Fx & portfolio adj.), driven by the launch of Eylea™ prefilled syringes and strong demand in China. Despite sales recovering slightly from the previous quarter, growth in Europe continued to be held back by negative factors related to COVID-19. Sales of Aspirin™ Cardio, Bayer’s product for secondary prevention of heart attacks, climbed by 20.8 percent (Fx & portfolio adj.), mainly due to a sharp increase in demand in China. The cancer drug Stivarga™ continued to deliver substantial sales gains (Fx & portfolio adj. plus 17.5 percent), especially in the United States. Among other factors, sales benefited from the product’s oral administration, enabling treatment to continue outside of hospitals and doctor’s offices during the ongoing pandemic. By contrast, the division recorded significant declines for the cancer drugs Nexavar™ (Fx & portfolio adj. minus 14.1 percent) and Xofigo™ (Fx & portfolio adj. minus 14.8 percent), especially in the United States. Sales of Xofigo™ were weighed down by restrictions related to COVID-19, among other factors.

EBITDA before special items at Pharmaceuticals rose by 0.9 percent to 1.515 billion euros. Thanks to stringent cost management, the division was able to grow its earnings and margin despite the decline in sales due to the negative overall impact of COVID-19 as well as negative currency effects of 48 million euros that additionally weighed on earnings.

EBITDA before special items at Consumer Health increased by 12.3 percent to 301 million euros, primarily due to the substantial increase in sales and positive contributions from the efficiency program launched in late 2018. Earnings were diminished by a negative currency effect of 30 million euros and the absence of contributions from the businesses divested in 2019.

Bayer has confirmed its revised currency-adjusted Group outlook for full-year 2020. On a currency-adjusted basis, the company aims to grow sales to between 43 and 44 billion euros and increase its EBITDA margin before special items to around 28 percent. This would correspond to EBITDA before special items of around 12.1 billion euros after adjusting for currency effects. Core earnings per share are expected to rise to between 6.70 and 6.90 euros on a currency-adjusted basis. However, due to revised growth assumptions, the company now expects to post currency- and portfolio-adjusted sales growth of 1 percent (previously: 2 percent) at Crop Science and 5 percent (previously: 4 percent) at Consumer Health. Bayer expects full-year sales and earnings to come under even greater pressure from currency headwinds.