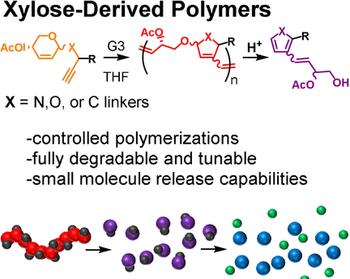 Degradable, bio-based polymers offer options for chemical recycling, and they can be a tool to store and release useful molecules. Scientists have developed a class of sugar-based polymers that are degradable through acid hydrolysis. The researchers also integrated “cargo” molecules in the polymer, which are designed to split off after polymer degradation. Degradable, cargo-bearing polymers are important for medical and sensor applications, says the study published in the journal Angewandte Chemie.

Most plastics resist natural degradation processes. Consequently, increasing contamination of the environment with plastics has led to a call for degradable plastics. Such materials can be subjected to chemical recycling processes, in which chemical reactions break up polymer bonds. Industry then either recovers the monomers and re-subjects them to polymerization, or it collects the resulting small molecules as useful building blocks for further reactions.

However, degradable polymers require a more elaborate polymer design. The linkages between the polymer building blocks should be sensitive to chemical or enzymatic treatments. In addition, sustainable polymers should be made of bio-based feedstock.

Tae-Lim Choi and colleagues from Seoul National University, South Korea, have found a way to produce high-quality polymers from xylose-based monomers. Xylose is a sugar found in plant cell walls. The method they use involves the preparation of the xylose-based monomers, including the attachment of linker groups, and reacting the monomers in a polymerization process called cascade metathesis polymerization.

To test if such plastic materials are degradable, the researchers treated the xylose-based polymers with hydrochloric acid, a treatment commonly found in chemical recycling procedures. The researchers found that the degradability depended on the linkage type. If the polymer contained a linkage made of a carbon atom, the polymer resisted hydrolysis, but linkages made with nitrogen or oxygen atoms led to immediate degradation.

Polymers with a nitrogen-based linkage resulted in compounds called pyrroles, whereas those made with oxygen produced furans. Pyrroles and furans are both abundant, naturally occurring compounds. However, the researchers advise care: “Furan derivatives are known to have a broad range of biological activity, which should be taken into consideration when identifying applications for these polymeric materials,” they said.

The researchers also integrated small reporter molecules in the polymers. Acid hydrolysis of the polymers with oxygen linkages produced furan derivatives, which subsequently released para-nitrophenol as a reporter molecule. “This type of cargo enables easy quantification of release. However, it can be substituted with other compounds, which exert various functions after their release,” Choi says.