Bioplastics in the sustainability dilemma 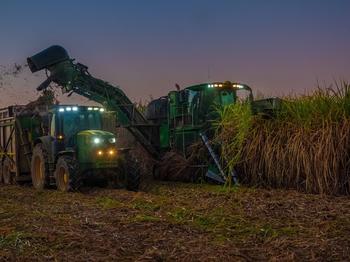 For the cultivation of sugar cane natural vegetation is often converted to agricultural land and forests are cut down (symbolic image).

Plastics made from crops such as maize or sugarcane instead of fossil fuels are generally considered sustainable. One reason is that plants bind CO2, which compensates for the carbon released into the atmosphere when plastics are disposed. However, there is a catch: With increasing demand for raw materials for bioplastic production, the areas under cultivation may not be sufficient. As a result, natural vegetation is often converted to agricultural land and forests are cut down. This in turn releases large amounts of CO2. The assumption that more bioplastics does not necessarily lead to more climate protection has now been confirmed by researchers at the University of Bonn in a new study. They found that the sustainability of plant-based bioplastics depends largely on the country of origin, its trade relationships and the raw material processed.

As in previous analyses, the scientists used a global, flexible and modular economic model developed at the University of Bonn to simulate the impact of rising supply for bioplastics. The model is based on a world database (Global Trade Analysis Project). For their current study, the researchers modified the original model by disaggregating both conventional plastics and bioplastics, as well as additional crops such as maize and cassava. "This is crucial to better represent the bioplastics supply chain in major producing regions and assess their environmental impacts from a life cycle perspective," emphasizes agricultural engineer Dr. Neus Escobar, who conducted the study at the Institute for Food and Resource Economics (ILR) and the Center for Development Research (ZEF) at the University of Bonn and is now based at the International Institute for Applied Systems Analysis in Laxenburg (Austria).

In the current study, she and her colleague Dr. Wolfgang Britz considered the loss of natural vegetation on a global scale. They made estimates of readily available land to be converted into productive uses at the region level and associated model parameters. In their previous publication, the Bonn scientists had already disaggregated the production of conventional plastics and bioplastics in Brazil, China, the EU and the U.S. – the countries that lead the way in bioplastics production. In their current study, they also included Thailand, which is home of carbon-rich forests. Experts expect the Asian country to become a leading global producer of biodegradable and biobased plastics in the near future. “All these changes in the model are necessary to estimate global spillovers of policies or technologies,” says Dr. Wolfgang Britz, who worked with his team on the extension of the model to derive sustainability indicators considering global land use change.

Factors such as country of origin and raw materials are decisive

The researchers simulated a total of 180 scenarios (36 scenarios per region) that varied according to the degree of bioplastics market penetration and other model parameters determining economywide responses. "We found that the carbon footprints of commercially available bioplastics are much larger than the values previously estimated in scientific literature and policy reports," says Neus Escobar.

The reason: CO2 emissions resulting from changes in land use outweigh the greenhouse gas savings resulting from the substitution for fossil raw materials in the long term. With one exception, the bioplastics produced in Thailand save an average of two kilograms of CO2 per ton. This is mainly due to the relatively smaller increase in bioplastics production that is simulated, which translates into minor adjustments in food prices and associated land cover changes. However, increasing production of bioplastics from cassava and sugarcane in Thailand to catch up with the other regions can result in the loss of carbon-rich ecosystems within the country.

None of the regions is clearly better positioned than another

"Our study shows that an expansion in bio-based production should be carefully assessed on a region-by-region case in order to understand potentially sustainability risks and trade-offs," says Neus Escobar. The authors emphasize that the proposed metrics can be used in the future to monitor the long-term sustainability of bioeconomic interventions globally. Among other things, the metrics could help identify where complementary policies are needed – for example, to prevent deforestation.