Compression or strain – the material expands always the same

Regardless if strained or compressed, the new material always expands 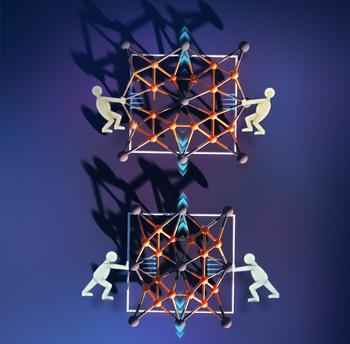 Regardless if strained or compressed, the new material always expands.

An international research team led by chemist Prof. Thomas Heine of TU Dresden has discovered a new two-dimensional material with unprecedented properties: regardless if it is strained or compressed, it always expands. This so-called half-auxetic behavior has not been observed before and is therefore very promising for the design of new applications, especially in nano-sensorics.

If you stretch an elastic band, it becomes thinner - a physical behavior that applies to most "common" materials. Since the 20th century, an opposite behavior has been known in materials research: The so-called auxetic (from ancient Greek auxetos, meaning 'stretchable') materials expand in the direction orthogonal to the strain. Likewise, they shrink when they are compressed. Scientifically, they are characterized by a negative Poisson's ratio. Probably the best known and oldest application of unusual Poisson's ratios is the bottle cork, which has a Poisson's ratio of zero. This has the effect that the cork can be put into the thinner neck of the bottle.

Due to their special properties, auxetic materials allow for completely new functionalities and design solutions for a variety of innovative products with adjustable functional properties, including applications in medical technology or in the development of protective equipment such as bicycle helmets or safety jackets.

Thomas Heine, Professor of Theoretical Chemistry at TU Dresden, and his team have now discovered a previously unknown phenomenon. Based on borophene, an atomically thin configuration of the element boron, a stable form was found by adding palladium, yielding the chemical composition PdB4. The computational modelling shows that this material behaves like an auxetic material under strain, but expands like an ordinary material under compression. In other words, regardless if it is strained or compressed, the material always expands.

"In addition to thorough characterization in terms of stability, mechanical and electronic properties of the material, we have identified the origin of this half-auxetic character and believe that this mechanism can be used as a design concept for new half-auxetic materials," explains Prof. Heine, "These novel materials could lead to innovative applications in nanotechnology, for example in sensing or magneto-optics. A transfer to macroscopic materials is equally conceivable."