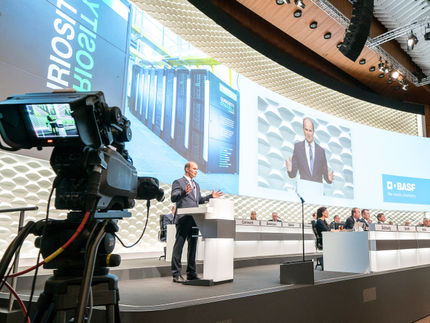 “We were able to carry over the tailwinds from the strong fourth quarter of 2020 into the first quarter of 2021,” said Dr. Martin Brudermüller, Chairman of the Board of Executive Directors of BASF, expressing one of the core messages to shareholders at this year’s virtual Annual Shareholders’ Meeting. “BASF had a strong start to the year 2021.”

BASF increased sales by €2.6 billion compared with the first quarter of 2020 to €19.4 billion. This was mainly due to higher prices and volume growth. Compared with the same quarter of the prior year, income from operations (EBIT) before special items rose by 42 percent to €2.3 billion. This was primarily attributable to considerably higher earnings contributions from the Materials and Chemicals segments. The Surface Technologies segment also recorded considerable earnings growth thanks to the recovery in automotive production. All regions contributed to the considerable increase in the BASF Group’s earnings in the first quarter of 2021.

Compared with the first quarter of 2020, sales in the Chemicals segment rose considerably by 16 percent to €2.7 billion. Both divisions posted higher sales, primarily due to significantly higher price levels. Sales volumes increased significantly as well. EBIT before special items amounted to €558 million. It rose considerably compared with the first quarter of 2020 in both divisions, especially in the Petrochemicals division. Earnings development in both divisions was driven by higher margins as a result of a recovery in demand, an improvement in income from equity-accounted companies, and lower fixed costs.

In the Materials segment, sales rose by 20 percent to €3.4 billion, considerably higher than in the prior-year quarter. The sales increase was mainly attributable to significantly higher prices and volumes. EBIT before special items rose considerably to €672 million. This was mainly driven by a significantly higher earnings contribution from the Monomers division due to improved isocyanate margins on the back of higher prices.

Sales of €2.1 billion in the Industrial Solutions segment were at the level of the prior-year quarter. Slightly higher sales in the Dispersions & Pigments division were offset by a slight decrease in the Performance Chemicals division. At €266 million, EBIT before special items was slightly below the prior-year quarter. Considerably higher earnings in the Dispersions & Pigments division were unable to completely offset the significantly lower earnings contribution from the Performance Chemicals division.

Sales in the Surface Technologies segment rose by 37 percent compared with the first quarter of 2020 to €5.9 billion. This increase was largely attributable to higher price levels in the Catalysts division as a result of higher precious metal prices. Significantly higher volumes in both divisions also contributed to the development of sales. EBIT before special items rose considerably compared with the first quarter of 2020 to €360 million. This was largely driven by volume growth in both divisions. The positive development in earnings was supported by lower fixed costs, especially in the Catalysts division.

Sales in the Nutrition & Care segment declined slightly in both divisions and were down overall by 3 percent compared with the prior-year quarter. The development of sales primarily reﬂected negative currency effects, mainly relating to the U.S. dollar. EBIT before special items decreased considerably compared with the prior-year quarter. The decline in earnings impacted both divisions and primarily reﬂected lower margins as a result of lower sales.

Sales in the Agricultural Solutions segment rose slightly by 1 percent compared with the first quarter of 2020 to €2.8 billion. Volumes were above the prior-year quarter in all regions. Higher price levels also contributed to sales growth. Significantly negative currency effects had an offsetting impact. At €807 million, EBIT before special items was on a level with the first quarter of 2020. Strong volume growth and lower fixed costs compensated for the negative currency effects.

Sales in Other amounted to €783 million, up by 12 percent compared with the first quarter of 2020. This was primarily the result of considerable sales growth in commodity trading. EBIT before special items declined considerably to minus €560 million. This was mainly due to higher additions to provisions for variable compensation components as a result of the strong first quarter of 2021.

The Board of Executive Directors and the Supervisory Board propose to the Annual Shareholders’ Meeting of BASF SE a dividend of €3.30 per share for the 2020 business year. This is equal to the dividend per share paid for the 2019 business year. If this dividend proposal is accepted, around €3 billion will be paid out to shareholders on May 4, 2021. Based on the year-end closing share price of €64.72, BASF shares offer a high dividend yield of 5.1 percent. “We want the BASF dividend to remain attractive for you in the future as well,” said Brudermüller at the virtual Annual Shareholders’ Meeting.

Early economic indicators have risen over the past few months, signaling a stronger recovery in macroeconomic activity than BASF previously assumed. However, the renewed rise in infection rates in many countries and ongoing restrictions on economic activity mean that the economic situation is still extremely fragile. In addition, disruptions to global supply chains could temporarily impact industry growth. Against this background, the assumptions presented in the BASF Report 2020 for growth in global gross domestic product and industrial and chemical production have been raised moderately. Expectations for oil prices have also been revised.

The assessment of the global economic environment in 2021 has been adjusted as follows (previous forecast from the BASF Report 2020 in parentheses):

Based on the development of sales and earnings in the first quarter of 2021, the stronger-than-expected recovery of the global economy and much higher raw materials prices than planned, the forecast for the BASF Group presented in the BASF Report 2020 was revised as follows (previous forecast from the BASF Report 2020 in parentheses):

The market environment continues to be dominated by a high level of uncertainty. Risks could arise if restrictions on macroeconomic activity continue for longer than expected as a result of measures to fight the coronavirus pandemic. Opportunities could arise from a faster vaccination rate and a more rapid recovery of the economy as a whole, as well as a continuation of the positive margin trend.