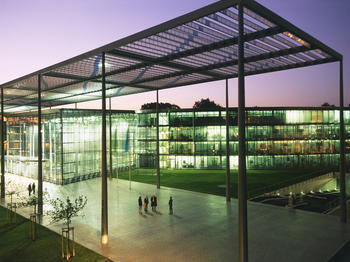 The building of Bayer AG's headquarters in Leverkusen

The Bayer Group had a successful start to 2021. “We’re seeing a good operational performance overall, but we were impacted by negative currency effects as expected,” said CEO Werner Baumann when the quarterly statement for the first quarter of 2021 was published on Wednesday. “Our Crop Science Division achieved encouraging sales growth in an improved market environment. Sales at Pharmaceuticals were steady, and in the Consumer Health Division we performed better than the competition.” The company confirmed the full-year outlook it issued in February 2021.

Free cash flow came in at minus 3.226 billion euros (Q1 2020: minus 793 million euros), the decline being mainly due to the settlement payments for litigations in the United States. This was also partly the reason for the 13.0 percent increase in net financial debt against the end of 2020, to 33.933 billion euros as of March 31, 2021.

Growth at Crop Science, especially in Latin America and Asia/Pacific

Bayer lifted sales in its agricultural business (Crop Science) by 6.4 percent (Fx & portfolio adj.) to 6.646 billion euros, with particularly strong growth in the Latin America and Asia/Pacific regions. Sales at Herbicides advanced by a significant 13.3 percent – mainly as a result of volume gains in all regions and higher prices, especially for Roundup™. Business also improved substantially at Fungicides (plus 22.0 percent) and Vegetable Seeds (plus 13.9 percent). The Fungicides business benefited from volume and price increases in the Latin America region, particularly for the product Fox Xpro™. This business also expanded in Asia/Pacific as the market situation normalized following the previous year’s restrictions related to the COVID-19 pandemic. Sales at Vegetable Seeds rose in all regions. The 3.4 percent (Fx & portfolio adj.) increase in sales at Soybean Seed & Traits was driven by volume gains in North America. Sales at Corn Seed & Traits remained at the level of the prior-year quarter (Fx & portfolio adj. minus 0.4 percent). This business developed positively in the Europe/Middle East/Africa region and in Latin America, partly as a result of higher prices, whereas it shrank in North America, in part due to a license expiration.

EBITDA before special items at Crop Science decreased by 6.2 percent to 2.448 billion euros, giving a margin of 36.8 percent. Positive effects from price and volume increases and the contributions from the ongoing efficiency programs did not fully offset the negative currency effects of 252 million euros.

As regards the litigation involving glyphosate-based Roundup™ products in the United States, approximately 96,000 current claims overall are covered by settlement agreements, or did not meet the settlement program eligibility criteria. The company continues to negotiate with plaintiffs’ counsel to reach agreements in the remainder of current cases. A new proposal for the management of future cases agreed upon with and supported by plaintiffs’ class counsel has been submitted to the responsible judge in California for preliminary approval. For the revised proposal, both parties worked diligently to address the points mentioned by the court.

Sales of prescription-only medicines (Pharmaceuticals) came in at 4.365 billion euros and were thus level with the prior-year period on a currency- and portfolio-adjusted basis (Fx & portfolio adj. minus 0.4 percent). In China, sales declines for Glucobay™ and Avelox™ as a result of the tender procedures implemented in 2020 were offset by growth in other products, especially the oral anticoagulant Xarelto™. In the United States, the division benefited particularly from the launch of the cancer drug Nubeqa™.

EBITDA before special items at Pharmaceuticals declined by 6.0 percent to 1.498 billion euros, yielding a margin of 34.3 percent. Earnings were diminished by price declines in sales along with negative currency effects of 57 million euros, which were offset to some extent by volume gains and cost reductions. There was also a positive effect on research and development expenses that came partly from the proportionate recognition of proceeds from the sale of a priority review voucher in the United States.

Following an exceptionally strong prior-year quarter with double-digit percentage growth, sales of self-care products (Consumer Health) registered a 4.4 percent decrease (Fx & portfolio adj.) to 1.252 billion euros in a declining market. The performance remained ahead of competition with growth momentum in the Dermatology and Nutritionals categories, with business up by 6.6 percent and 4.7 percent, respectively (Fx & portfolio adj.). However, the continuing high level of protective and hygiene measures and the ongoing lockdowns had a negative impact on sales, particularly on cough and cold products. This led to a decline of 30.1 percent (Fx & portfolio adj.) in the Allergy & Cold category. While sales in Asia/Pacific and Latin America showed continued positive growth, sales in North America and Europe/Middle East/Africa were markedly affected by the extraordinarily mild cough and cold season.

EBITDA before special items at Consumer Health moved back 3.0 percent to 292 million euros. Earnings were diminished by negative currency effects of 26 million euros. At the same time, the EBITDA margin before special items improved by 1.8 percentage points to 23.3 percent, largely on account of lower marketing expenses in the currently volatile market environment as well as one-time gains from the divestment of three non-core brands.

Bayer also made good progress in the area of sustainability in the first quarter. As already announced in February, the company is stepping up its efforts to achieve an even more inclusive and diverse workforce and corporate culture, targeting gender parity on all management levels for the year 2030. Also in February, the Consumer Health Division, for example, launched its Nutrient Gap Initiative to help close the gap in the supply of vitamins and minerals to people in underserved regions. The program aims to reach 50 million people annually in these regions by 2030 through direct action and in partnership with major NGOs. The Nutrient Gap Initiative will contribute to the attainment of the Consumer Health Division’s sustainability goal of providing 100 million people in underserved communities with access to everyday health care by 2030.