Microbes in cow stomachs can break down plastic 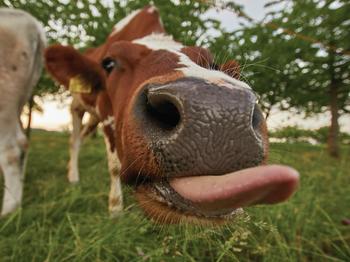 Photo by Wolfgang Hasselmann on Unsplash

Plastic is notoriously hard to break down, but researchers in Austria have found that bacteria from a cow's rumen - one of the four compartments of its stomach - can digest certain types of the ubiquitous material, representing a sustainable way to reduce plastic litter.

The scientists suspected such bacteria might be useful since cow diets already contain natural plant polyesters. "A huge microbial community lives in the rumen reticulum and is responsible for the digestion of food in the animals," said Dr Doris Ribitsch, of the University of Natural Resources and Life Sciences in Vienna, "so we suspected that some biological activities could also be used for polyester hydrolysis," a type of chemical reaction that results in decomposition. In other words, these microorganisms can already break down similar materials, so the study authors thought they might be able to break down plastics as well.

Ribitsch and her colleagues looked at three kinds of polyesters. One, polyethylene terephthalate, commonly known as PET, is a synthetic polymer commonly used in textiles and packaging. The other two consisted of a biodegradable plastic often used in compostable plastic bags (polybutylene adipate terephthalate, PBAT), and a biobased material (Polyethylene furanoate, PEF) made from renewable resources.

They obtained rumen liquid from a slaughterhouse in Austria to get the microorganisms they were testing. They then incubated that liquid with the three types of plastics they were testing (which were tested in both powder and film form) in order to understand how effectively the plastic would break down.

According to their results, which were recently published in Frontiers in Bioengineering and Biotechnology, all three plastics could be broken down by the microorganisms from cow stomachs, with the plastic powders breaking down quicker than plastic film. Compared to similar research that has been done on investigating single microorganisms, Ribitsch and her colleagues found that the rumen liquid was more effective, which might indicate that its microbial community could have a synergistic advantage - that the combination of enzymes, rather than any one particular enzyme, is what makes the difference.

While their work has only been done at a lab scale, Ribitsch says, "Due to the large amount of rumen that accumulates every day in slaughterhouses, upscaling would be easy to imagine." However, she cautions that such research can be cost-prohibitive, as the lab equipment is expensive, and such studies require pre-studies to examine microorganisms.

Nevertheless, Ribitsch is looking forward to further research on the topic, saying that microbial communities have been underexplored as a potential eco-friendly resource.