New type of magnetism unveiled in an iconic material

Discovery of a new form of magnetism in strontium ruthenate 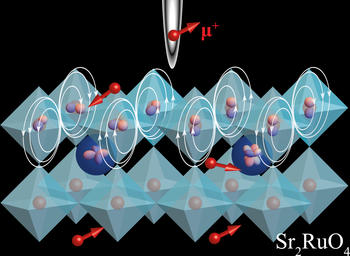 Spin polarized muon particles (red spheres with arrows) probing a new form of magnetism in the perovskite superconductor Sr2RuO4 due to orbital loop currents generated on the Sr2RuO4 surface. The schematic shows the dipolar lines associated with the magnetic field (white lines) generated only by the orbitals at the surface of Sr2RuO4, and which induce a change in the precession of the spin of the implanted muons.

Since the discovery of superconductivity in Sr2RuO4 in 1994, hundreds of studies have been published on this compound, which have suggested that Sr2RuO4 is a very special system with unique properties. These properties make Sr2RuO4 a material with great potential, for example, for the development of future technologies including superconducting spintronics and quantum electronics by virtue of its ability to carry lossless electrical currents and magnetic information simultaneously. An international research team led by scientists at the University of Konstanz has been now able to answer one of the most interesting open questions on Sr2RuO4: why does the superconducting state of this material exhibit some features that are typically found in materials known as ferromagnets, which are considered being antagonists to superconductors? The team has found that Sr2RuO4 hosts a new form of magnetism, which can coexist with superconductivity and exists independently of superconductivity as well. The results have been published in the current issue of Nature Communications.

After a research study that lasted several years and involved 26 researchers from nine different universities and research institutions, the missing piece of the puzzle seems to have been found. Alongside the University of Konstanz, the universities of Salerno, Cambridge, Seoul, Kyoto and Bar Ilan as well as the Japan Atomic Energy Agency, the Paul Scherrer Institute and the Centro Nazionale delle Ricerche participated in the study.

So far not the right tool to find evidence

“Despite decades of research on Sr2RuO4, there had been no evidence for the existence of this unusual type of magnetism in this material. A few years ago, however, we wondered if the reconstruction that happens in this material on the surface, where the crystal structure exhibits some small changes at the atomic scale level, could also lead to an electronic ordering with magnetic properties. Following this intuition, we realized that this question had probably not been addressed because nobody had used the “right tool” to find evidence for this magnetism, which we thought could be extremely weak and only limited to a few atomic layers from the surface of the material” states the leader of this international research study, Professor Angelo Di Bernardo from the University of Konstanz, whose research focuses on superconducting spintronic and quantum devices based on innovative materials.

To carry out the experiment, the team used high-quality single crystals of Sr2RuO4 prepared by the group of Dr Antonio Vecchione from the Centro Nazionale delle Ricerche (CNR) Spin in Salerno. “Making large crystals of Sr2RuO4 without any impurities was a big challenge albeit crucial for the success of the experiment, since defects would have given a signal similar to the magnetic signal which we were hunting,” says Dr Vecchione.

The right tool is a beam of muons

The special “tool” which the researchers used to unveil the new magnetism is a beam of particles called muons that are produced in a particle accelerator in Switzerland at the Paul Scherrer Institute (PSI). “At PSI we have the only facility in the world to produce muons which can be implanted with a precision of a few nanometers. These particles, which can be used to detect extremely tiny magnetic fields, could be stopped very close to the surface of Sr2RuO4, which was crucial for the success of the experiment” says Dr Zaher Salman who coordinated the experiment at the PSI muon facility.

“It was a really nice experience to carry out measurements in an international beamtime facility like PSI and interact with such a large group of inspiring scientists from all over the world, since the very beginning of my doctorate in Konstanz” says Roman Hartmann, a doctoral researcher who equally contributed as first author to the study.

The authors also developed a theoretical model suggesting the origin of this hidden surface magnetism. “Unlike for conventional magnetic materials whose magnetic properties originate from the quantum mechanical property of an electron known as spin, a cooperative swirling motion of interacting electrons, generating circulating currents at the nanometer scale, underlies the magnetism discovered in Sr2RuO4” states Dr Mario Cuoco from the CNR-spin who developed the theoretical model along with Dr Maria Teresa Mercaldo and other colleagues at the University of Salerno.

As pointed out by Professor Jason Robison at the University of Cambridge, the results confirm that “physical properties can be dramatically modified at a complex material surface and at interfaces within thin-film heterostructures, and these modifications can be exploited for discovering new science for basic and applied research including the design and development of quantum devices.”

The co-authors of the project also include Professor Yoshiteru Maeno at the University of Kyoto, the scientist who first discovered superconductivity in Sr2RuO4 in 1994 and who has contributed to some of the most important studies on this material reported over the last 30 years.

“This finding not only resolves a long-standing puzzle and makes the iconic material Sr2RuO4 even more interesting than before, but may also trigger new investigations which eventually help answering other striking open questions in materials science”, says Professor Elke Scheer from the University of Konstanz, another of the leaders of the project and head of the Mesoscopic Systems research team.

The new type of magnetism discovered in Sr2RuO4 is essential to also better understanding the other physical properties of Sr2RuO4 including its unconventional superconductivity. The fundamental discovery may also lead to the search for this new form of magnetism in other materials similar to Sr2RuO4 as well as trigger new studies to better understand how such magnetism can be manipulated and controlled for novel quantum electronics applications.