New light source: A million times brighter than the sun 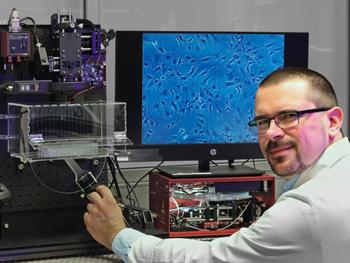 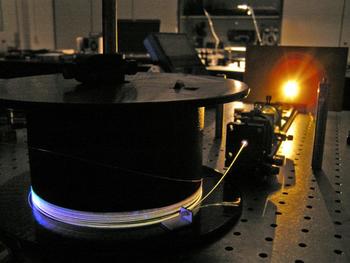 The new laser is one million times brighter than the sun: In this laboratory set-up, it generates a supercontinuum.

A new high-performance white-light laser is expected to speed up quality control in the semiconductor industry and provide closer monitoring of toxicity tests in microbiology. In one step, this laser enables the two-sided characterization of surfaces and can be integrated into production chains. The technology has been developed at the Fraunhofer Application Center for Optical Metrology and Surface Technologies (AZOM) and Westsächsische Hochschule Zwickau (WHZ) as part of a PhD thesis.

In his PhD thesis, Dr. Tobias Baselt focused on enhancing the optical performance of white-light lasers in metrology. The aim was to minimize costs, time and errors, for example in chip production or microbiology. To this end, the scientist investigated the application of white-light laser sources in two different measurement processes. The result was a new light source – a million times brighter than the sun and can be easily integrated into manufacturing processes – without having to stop them or segregate samples. Today, Baselt heads the Optical Fiber Technology group at Fraunhofer AZOM and is a research associate at the Faculty of Physical Engineering at WHZ. ”In my PhD thesis, I researched the application of specially developed laser sources with white laser light, which are particularly high-performing compared to the current state-of-the art and therefore very promising for microbiological and industrial measurement methods,” he explains.

Quality control in the semiconductor industry and microbiology

Particularly in high-cost manufacturing processes in the semiconductor industry, such as chip production, significant potential savings could thus be achieved. Baselt demonstrated that the white-light laser process can perform quality control of semiconductor elements more quickly. For example, the intensity of the light source can be used to characterize the surface profile, deeper structures and even the reverse side of microchips in a single process. Microbiology could also benefit from the new light source, for example in cell culture studies. In this process, the white-light laser, also known as a supercontinuum source in technical jargon, is focused on the cell for a brief moment. The intensity of this light source permits the imaging of the smallest cell structures without destroying them. With this measurement method, cells can be monitored in real time, allowing early detection of cell changes as well as cell damage. Whereas it was previously only possible to record them at fixed times, Tobias Baselt's solution makes it possible to record their states non-invasively. This allows close monitoring of the drug impacts, particularly in bioreactors or in toxicity tests. In the next steps, the laboratory results will be further investigated and developed for integration into industrial processes.