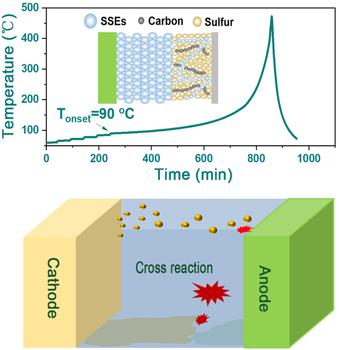 Lithium-sulfur (Li-S) batteries offer great potential for use in energy storage systems because of their large energy capacity. However, safety problems related to their thermal behavior continue to be a concern for scientists.

Now, a research team led by researchers from the Qingdao Institute of Bioenergy and Bioprocess Technology (QIBEBT), Chinese Academy of Sciences (CAS), have revealed the thermal runaway routes of Li-S batteries, which may help to address the safety issues of next-generation batteries.

"One of these safety concerns with Li-S batteries is thermal runaway, a phenomenon where the battery begins to overheat uncontrollably. As the temperature in the battery rises, the electrolyte can be ignited, possibly leading to a fire," said HUANG Lang, assistant professor at QIBEBT and lead author of the study.

The research team set out to investigate the safety characteristics of large-format pouch-cell Li-S batteries. In particular, they examined inorganic all-solid-state electrolytes because of their high thermal stability, which may provide a strategy for overcoming the safety problems. Then they analyzed the thermal runaway behaviors of the pouch-cell batteries.

The results showed that even all-solid-state electrolytes cannot stop the thermal runaway that occurs in Li-S batteries at high temperatures. This understanding will benefit scientists looking at ways to build safer next-generation Li-S batteries.

The team examined the thermal features of Li-S batteries from the aspect of the material. They started at the whole pouch cell and worked down to the electrode level.

They discovered that the exothermic chain reactions of Li-S batteries were initially triggered by sulfur cathode derivatives that reacted with the electrolyte. This reaction then accelerated as the lithium metal anode reacted with the electrolyte or cathode active species. As the sulfur cathode and Li metal anode melted, they immigrated and cross-reacted at high temperatures, playing a decisive role in the battery's thermal runaway behavior.

The study reveals that as-assembled Li-S batteries using electrolytes with different thermal stabilities, including inorganic all-solid-state electrolytes, all undergo rapid thermal runaway because of the unavoidable short circuiting that occurs when the sulfur cathode and Li anode melt.