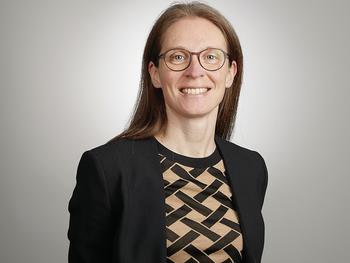 “It is a great honor and I am particularly grateful to Merck for shining the spotlight on analytical chemistry. Although sometimes considered ancillary tools, new analytical developments are indeed the backbone of any scientific endeavor,” Gabelica said after receiving the award.

Gabelica has developed analytical methods based on mass spectrometry to study nucleic acid structures and their interactions with neighboring molecules. The groundbreaking aspect of Gabelica’s work centers on making circular dichroism ion spectroscopy feasible for large biomolecule ions. With mass spectrometry so far typically unable to detect chirality, her work opens new doors to measuring chirality directly with the mass spectrometer. Gabelica’s research to measure circular dichroism directly on biomolecular ions expands the capabilities of mass spectrometry for structural analysis. It could enable a wide range of applications, taking advantage of the mass separation and circularly polarized light to characterize other chiral molecules. She has achieved international acclaim with an article published in the trade magazine “Science”.

This year’s winner of the Heinrich Emanuel Merck Award for Analytical Science obtained a PhD in Chemical Sciences in 2002 at the University of Liège, Belgium. After a postdoc position as a Humboldt fellow at Goethe University in Frankfurt, Germany, Gabelica rejoined the Mass Spectrometry Laboratory at the University of Liège as a research associate in 2005. She then moved to the Institut Européen de Chimie et Biologie (IECB, Pessac, France) in 2013, where she is the current director, and became a research director at Inserm (Institut national de la santé et de la recherche médicale – French National Institute of Health and Medical Research).

“With her groundbreaking investigations revealing molecular interactions, Valérie Gabelica joins a prominent group of innovative Heinrich Emanuel Merck Award winners,” said Ulrich Betz, Vice President Innovation at Merck. “By directly assessing the chirality of any molecule already during mass spectrometry, the versatility of this technology has been greatly enhanced with potential further use in life science and drug discovery.”

The Heinrich Emanuel Merck Award for Analytical Science, worth € 15,000, has been recognizing scientists focusing on new methods in chemical analysis and the development thereof since 1988. The resulting applications are aimed at improving the quality of human life, for example in fields such as life, material and environmental sciences.

Apart from the award presented today, Merck recognizes science and scientists with many other awards. The latest addition to this is the Future Insight Prize, which was announced for the first time in July 2018 and will be awarded again in July of this year to researchers for their work on helping to combat climate change. Further research grants and awards from Merck include, among others, the Emanuel Merck Lectureship, the Innovation Cup. and the Alfred A Bader Award for student innovation.