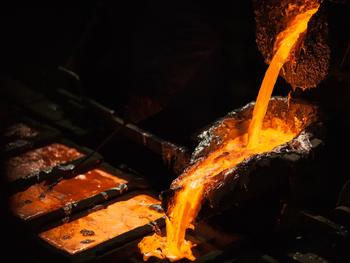 Scientists from the University of Birmingham have described how microscopic crystals grow and change shape in molten metals as they cool, in research that is breaking new ground in alloy research and paves the way for improving the tensile strength of alloys used in casting and welding.

Their research, published in Acta Materialia, used high-speed synchrotron X-ray tomography to ‘photograph’ the changing crystal structures in molten alloys as they cool.

The study shows that as aluminium-copper alloy cools the solidification process starts with the formation of faceted dendrites, which are formed by a layer-by-layer stacking of basic units that are just micrometres in size.  These units start out as L shaped and stack on top of each other like building blocks, but as they cool they change shape and transform into a U shape and finally a hollowed out cube, while some of them stacked together to form beautiful dendrites.

The study was led by Dr Biao Cai, from the University of Birmingham’s School of Metallurgy and Materials, whose research has already demonstrated how magnetic fields influence crystal growth.

Dr Cai commented:  “The findings from this new study provide a real insight into what happens at a micro level when an alloy cools, and show the shape of the basic building blocks of crystals in molten alloys.  Crystal shape determines the strength of the final alloy, and if we can make alloys with finer crystals, we can make stronger alloys.”

He added: “The results are in direct contrast with the classical view of dendrite formation in cooling alloys, and open the door to developing new approaches that can predict and control the formation intermetallic crystals.”

Dr Cai’s previous research has resulted in a novel technology to improve the quality of recycled aluminium by removing iron from molten alloy in a simple, inexpensive process that uses magnets and a temperature gradient.

The technology is the subject of a patent application filed by University of Birmingham Enterprise.  It has also attracted funding from the Midlands Innovation Commercialisation of Research Accelerator and the EPSRC-Impact Acceleration Account, which has enabled Biao to build a large-scale prototype that runs to 1000oC, and uses a 1 Tesla magnet.

The prototype is currently being tested using ingots provided by the Tandom Metallurgical Group, which operates an international trading operation from its base in Congleton, Cheshire, where they produce aluminium alloys, master alloys and recycle aluminium products, scraps and drosses.

Dr Cai expects to publish the results of the testing and showcase the demonstrator to industry before the end of the year, with the aim of finding industrial collaborators willing to run tests in foundry settings in combination with existing production lines.