Turing's theory of chemical morphogenesis validated 60 years after his death 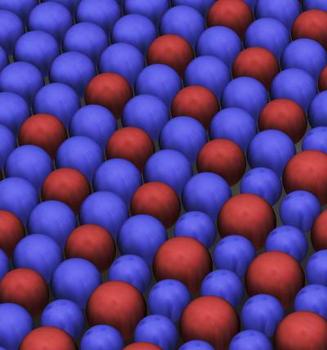 This illustration is a montage of photographs, taken from Figure 4 of 'Testing Turing's Theory of Morphogenesis in Chemical Cells,' depicting the evolution of physical morphogenesis from an initial homogeneous state (upper left, same volume and color) through a chemically heterogeneous state (center, same volume but different colors) and into a chemo-physical heterogeneous state (lower right, different volumes and colors). This cellular differentiation takes place exactly as Alan Turing predicted it would in his 1952 paper, 'The Chemical Basis of Morphogenesis.'

Alan Turing's accomplishments in computer science are well known, but lesser known is his impact on biology and chemistry. In his only paper on biology, Turing proposed a theory of morphogenesis, or how identical copies of a single cell differentiate, for example, into an organism with arms and legs, a head and tail.

Now, 60 years after Turing's death, researchers from Brandeis University and the University of Pittsburgh have provided the first experimental evidence that validates Turing's theory in cell-like structures.

The team published their findings in the Proceedings of the National Academy of Sciences.

Turing was the first to offer an explanation of morphogenesis through chemistry. He theorized that identical biological cells differentiate, change shape and create patterns through a process called intercellular reaction-diffusion. In this model, a system of chemicals react with each other and diffuse across a space — say between cells in an embryo. These chemical reactions need an inhibitory agent, to suppress the reaction, and an excitatory agent, to activate the reaction. This chemical reaction, diffused across an embryo, will create patterns of chemically different cells.

Turing predicted six different patterns could arise from this model.

At Brandeis, Seth Fraden, professor of physics, and Irv Epstein, the Henry F. Fischbach Professor of Chemistry, created rings of synthetic, cell-like structures with activating and inhibiting chemical reactions to test Turing's model. They observed all six patterns plus a seventh unpredicted by Turing.

Just as Turing theorized, the once identical structures — now chemically different — also began to change in size due to osmosis.

This research could impact not only the study of biological development, and how similar patterns form in nature, but materials science as well. Turing's model could help grow soft robots with certain patterns and shapes.

More than anything, this research further validates Turing as a pioneer across many different fields, Fraden says. After cracking the German Enigma code, expediting the Allies' victory in World War II, Turing was shamed and ostracized by the British government. He was convicted of homosexuality — a crime in 1950s England — and sentenced to chemical castration. He published "The Chemical Basis of Morphogenesis" shortly after his trial and killed himself less than two years later, in June 1954. He was 41 years old.