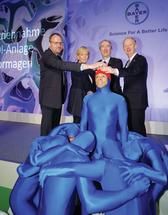 Symbolic push of a button with a twist (from r.): Bayer CEO Dr. Marijn Dekkers, Patrick Thomas, CEO of Bayer MaterialScience, NRW Governor Hannelore Kraft and André van Broich, Chairman of the Dormagen Works Council, started up the new TDI plant in Dormagen with the help of the physical theater group Mobilé.

Materials manufacturer Bayer MaterialScience has successfully concluded a major capital expenditure project in Germany. On Tuesday, the company brought an ultra-efficient and resource-conserving world-scale plant for the production of the chemical TDI, a main component in high-quality foams, on stream at its site in Dormagen, located in the state of North Rhine-Westphalia. Valued at some EUR 250 million, the high-tech plant was inaugurated at a ceremony attended by representatives from politics, industry, public administration authorities and the local community.

Including infrastructure and supplier costs, total capital expenditure at Chempark Dormagen amounts to more than EUR 400 million. The site is to become Bayer MaterialScience’s European center for TDI production. Under construction for 30 months, the new plant replaces a smaller production unit for toluene diisocyanate (TDI). The chemical is used in the production of flexible polyurethane foams, which is used to produce many everyday articles including mattresses, car seats and upholstered furniture. Demand for TDI is expected to continue growing steadily worldwide in the years ahead.

Kraft: North Rhine-Westphalia will be strengthened as a chemical industry hub

Hannelore Kraft, governor of North Rhine-Westphalia, said at the inauguration ceremony, “The investment clearly illustrates the capability of Bayer's Dormagen site. But it is also an important signal about the international competitiveness of North Rhine-Westphalia as a center of the chemical industry.” She added that the fact that Bayer also sent clear signals with respect to environmental protection is the way of the future. Another key factor for the success of the local chemical industry besides the funding of training and education is the strengthening of public acceptance. “Bayer did an exemplary job in terms of local public involvement.”

“This investment is also a commitment to Germany as an industrial location – and to the state of North Rhine-Westphalia,” said Bayer CEO Dr. Marijn Dekkers. In North Rhine-Westphalia alone, Bayer has invested more than EUR 1 billion over the past ten years in the maintenance and expansion of MaterialScience production facilities. We want to continue investing in both NRW and Germany,” Dekkers said while also pointing out the need for the appropriate boundary conditions.

Patrick Thomas, CEO of Bayer MaterialScience, presented the capital expenditure project within the context of the planned separation of the company from the Bayer Group. “MaterialScience is superbly positioned worldwide and optimally prepared to operate independently. Our products are in demand, our customers value our innovative power, and we are leaders in our markets,” he said.

Thomas cited the gas-phase technology developed at Bayer as an example of the company’s power to innovate. This technology makes TDI production in Dormagen particularly energy and resource efficient. “Compared with a conventional plant with the same capacity, the new facility will reduce energy consumption by up to 60 percent and require as much as 80 percent less solvent,” Thomas explained. “This also gives us an important competitive advantage.”

André van Broich, Chairman of the Bayer Works Council in Dormagen, also raised the subject of planning certainty. “The past few years, in particular, have been marked by deficits in both politics and society with respect to Germany as an industry location,” he said. “We feel that we are in very good hands here, and we also received a lot of political support for the TDI plant. Unfortunately, that is not the case with other important projects.”

Nevertheless, van Broich considers the new plant to be a good example of how North Rhine-Westphalia, as Europe’s largest chemistry region, is also competitive internationally. “We have outstanding, highly qualified people with the skills required to operate high-tech facilities such as this one safely and efficiently, demonstrating once again that supporting vocational training pays off.”

Some 20 new employees were hired as a result of the project. The project also safeguards existing upstream and logistics jobs at the site. The same applies to thousands of additional jobs associated with TDI production in the value-added chain both in the state of North Rhine-Westphalia and throughout Germany.

Companies from Dormagen and the surrounding area will be providing maintenance, repair and technical services in and around the new plant throughout its operation. Furthermore, over 500 workers were involved at times during the construction phase. Many contractors came from the region, such as Keynes engineering from Neuss, plant manufacturer Quast based in the town of Eschweiler near Aachen, and Weber construction in Pulheim, which is outside of Cologne.