Recent research provides new data on chemical gardens, whose formation is a mystery for science 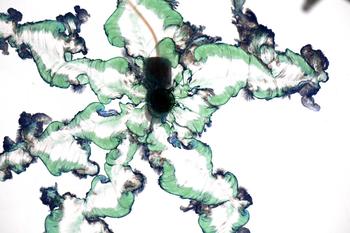 This is an image of chemical gardens.

Recent research which has counted with the participation of the University of Granada Andalusian Institute of Earth Sciences has yielded new data on chemical gardens, mysterious formations produced when certain solid salts (copper sulfate, cobalt chloride) are added to an aqueous solution of sodium silicate.

Self-contained chemical gardens are formed through the self-assembly of mineral precipitates generated during certain chemical reactions, and they produce coloured forms that resemble vegetable structures. The first researcher who watched them was Johann Rudolf Glauber in 1646, and since then their formation has been a veritable mystery for the scientific community.

Besides their popularity in chemistry experiments for massive audiences, self-contained chemical gardens present analogies with a variety of natural systems, such as the ice channels formed underneath sea ice or the hydrothermal chimneys at the bottom of the oceans where it is believed that life on earth could have originated.

Their growth patterns are being studied today fundamentally to produce new self-structuring materials, or to understand their role in the origin of life, thanks to the energy they can store.

To produce a chemical garden in the lab, one typically introduces a metallic salt in an alkaline solution within a container. This leads to the growth of a series of irregular, tubular, multi-coloured structures thanks to the combined action of different physical processes (osmotic pressure, gravity effects, reactions and diffusion)

The fact that these different processes interact in a complex way without any sort of control whatsoever provokes the irregularity, and above all the impossibility of reproducing the obtained three-dimensional forms obtained in this process. This precludes detailed understanding of the growth mechanisms of these structures.

In this context, researchers from the Non-linear Physical Chemistry Unity at the Free University of Brussels, and from the University of Granada Andalusian Institute of Earth Sciences have demonstrated that it is possible to obtain an important collection of reproducible structures by having the chemical gardens grow in a confined, almost bi-dimensional environment, by injecting a reagent inside another one between two horizontal plaques.

The horizontal confinement of the reactor reduces the effects of gravity, while the injection of one reagent within another reduces the effects of osmotic pressure. Besides, the control of the initial concentrations of the reagents, and of the flow of injection allows for the study of the relative importance of chemical processes and transport within the selection of the shape in the precipitate.

Published in the journal PNAS, this study has enabled researchers to obtain in a controlled and reproducible way a large variety of motives, such as flowers, filaments or spirals, thus facilitating a better comprehension of the mechanisms that produce their formation.

For instance, the authors of this study have exploited standard methods for the analysis of bi-dimensional motifs with the aim of elucidating the grown mechanism for the spirals, with the support of an elemental geometric models.

These results provide a new methodology for the analysis of growth in an non-equilibrium situation, aimed at obtaining a better control of the physical and chemical properties of self-assembled solid materials.