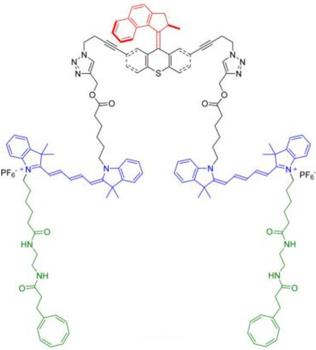 Rice University scientists have created light-driven, single-molecule submersibles. A new version of the molecule strengthens its fluorescent response for better tracking. Atoms in red make up the light-activated motor.

The next generation of nanosubmarines being developed at Rice University has been upgraded with tags that fluoresce longer, which enables the submersibles to be tracked for greater periods while being driven through a solution.

The single-molecule vehicles introduced by the Rice lab of chemist James Tour last year may someday be used to deliver drugs or other cargo. The new version is built and tested with collaborators at Tel Aviv University in Israel.

The first nanosub, USN-1, could be monitored but not imaged by a technique that would irradiate it with light for very short times. But that did not offer information about the submersible's trajectory, according to lead author Víctor García-Lopéz, a former Rice graduate student. The latest model, the 334-atom USN-2, can be viewed by single-molecule microscopy for at least 1.5 seconds, long enough for 30 frames of video.

"This makes it possible for us to track the trajectory of a single nanosubmersible," Tour said. "It should lead to a better understanding of how our vehicles move."

The lab attached cyclooctatetraene (COT) to the molecule's body and motor to keep them from bleaching, which quenches fluorescence. The light-driven motor developed by scientists in the Netherlands is a tail-like ligand that spins about a million times per second. The new subs, like the originals, are capable of moving 15 meters per second over nanoscale distances, based on the thrust provided by each turn of the rotating motor. Between the frequent collisions that stop their forward motion, Tour said, they are "the fastest-moving molecules ever seen in solution."

The nanosubmarines still can't be steered in the traditional sense, Tour said. The team is satisfied for the moment with achieving "enhanced diffusion" that lets them figure out how to move a one-molecule vehicle in a solution of similarly sized molecules.

"The next step is to track these nanosubmarines in solution and see if we can use them to deliver cargo or interact with cells," Tour said.