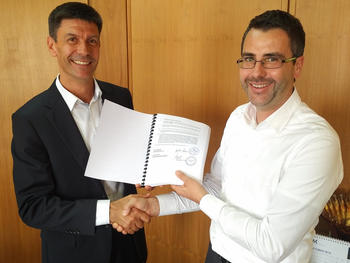 Lewa has signed a purchase contract with Seko Middle East FZE (right: Gianluca Minicucci, Director of Seko Middle East FZE), to take effect on December 1, 2016. The object of the agreement was the takeover of the entire plant, all assets and the chemical injection package (CIP) business. Sylvain Latuilerie (left) will manage the new unit.

Lewa GmbH, the manufacturer of metering and process diaphragm pumps based in Leonberg, Germany, has signed a purchase contract with Seko Middle East FZE, a wholly-owned subsidiary of Seko S.p.A., to take effect on December 1, 2016. The object of the agreement was the takeover of the entire plant, including all assets and the chemical injection package (CIP) business for the oil and gas sector, the (petro-) chemical industry and the power plant sector. The acquisition is part of the Lewa Group’s strategy of specializing in pumps and integrated systems solutions.

The Lewa Group will not be alone in benefiting from the additional construction and manufacturing capacity in the important Middle East region: As a manufacturer of chemical injection packages, the new unit becomes part of Nikkiso’s Industrial Division and supplies the company’s subsidiaries and parent companies internally. “By connecting in-house engineering and production, we control the entire value chain and can ensure high quality. At the same time, we expect an improvement in our competitiveness in this sector”, said Peter Wagner, CEO of Lewa GmbH and responsible for Industrial Division.

Since the national oil companies in the region frequently demand a certain level of integration, this offers Lewa an opportunity to be listed, not only for pumps as before, but also for entire chemical injection packages. Global sales are carried out by the entire division. In the process, the company’s strength in the form of local know-how in the various markets will be used. A new market is also opening up: supplying products to power plants. “Seko has already served customers with CIPs. We intend to further cultivate and expand these contacts”, Wagner says.

A smooth transfer of business activities and retention of all staff members is planned for the coming weeks. In addition, the factory’s current certifications in accordance with OHSAS 18001, ISO 14001, ISO 9001 and the ASME “U-Stamp” for the production of pressure vessels will be secured and transferred. Managing Director of the new Lewa Nikkiso Middle East FZE is Sylvain Latuilerie, who previously managed the local Lewa company in Dubai. It will be integrated into the newly established company in stages.